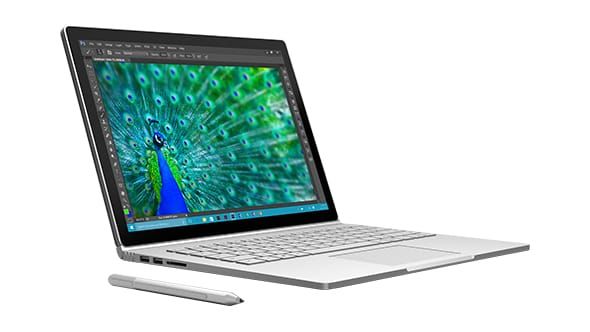 There was a lot of speculation going on in the past weeks regarding the Windows 10 devices Microsoft was about to launch at their October 6 event. We knew for sure there will be two Lumia flagship smartphones, the 950 and the 950 XL, and we also knew about the Surface Pro 4. There was also chatter about the Lumia 550, but no one knew much about the Surface Book. It was hinted that there might be a larger device than the Surface Pro 4, but there was no certainty that it was going to be a laptop. So,just as we thought, Microsoft prepared a surprise for us. And it was a pleasant one.

The Surface Book is not a regular laptop. Its screen is removable, so it is actually a tablet- laptop hybrid device. We’ve seen other hybrid tablets in the past, but none of them are quite as interesting as Microsoft’s Surface Book. This is a unique device due to its extremely interesting hinge called “dynamic fulcrum” by Microsoft. It doesn’t only allow users to connect or detach the screen, they can choose to flip it all the way around, propping the screen on the keyboard.

The Surface Book features a 13.5- inch, PixelSense display with 3000 x 2000 pixels resolution and a 267 ppi pixel density. The display is covered in Gorilla Glass, so it should be both beautiful and resistant. The Magnesium silver body is light and eye- catching. It is an incredibly thin laptop, measuring only 22.8 mm. The integrated keyboard is back- lit and Microsoft says it is perfect and will type almost silently. The glass trackpad with five points of touch sensitivity is situated beneath the keyboard and, to be honest, has a premium look to it.

The Surface Book is powered by a 6th Gen Intel® Core™ i5 or i7 processor and features up to 16 GB RAM and up to 1 TB internal storage.  We can also find an Nvidia GeForce GPU with GDDR5 memory, located under the keyboard of the Surface Book. This means that the device will function at its full power only when used in laptop- mode. When the keyboard is not connected with the screen, it will lack some of its features. Speaking of the dock part of the Surface Book, it also includes two USB 3.0 ports and a full size SD card slot, so connecting it with other devices won’t be a problem.

The Surface Book will become available for purchase starting 26 October and it can be pre- ordered as of Wednesday. The price starts at $1,499.00 and can reach $2,699 on larger configuration. It is not exactly a low price, but if the Surface Book will deliver everything that Microsoft promises, it might be worth that kind of a sum.

I have always been eager to try out any gadget I could get my hands on. I became a tech journalist so that I could always be around technology and see the newest devices. I use gadgets every day to make my work and life easier. I have enough experience to know If a device is actually improving my activity, offers something useful or new. I will post my honest opinions and judge a device as objectively as I can.
@https://twitter.com/Colin27Anderson
Previous Samsung 32″ 1080P Led Smart TV vs Insignia 32″ 1080P – Plus $100 price tag
Next 21.5- inch iMac 4K To Launch Next Week