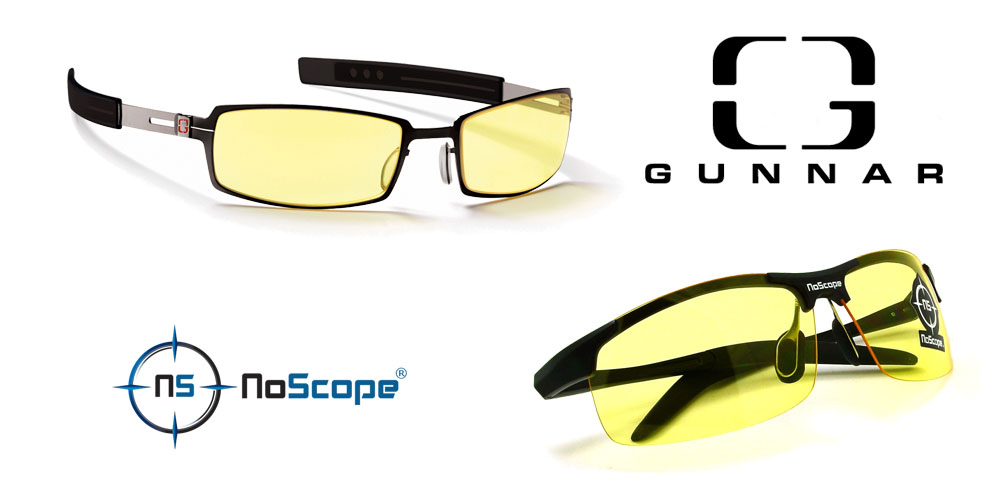 When it comes to business, no matter what you’re field is, you can sure as hell expect some hefty competition. Up until this year, Gunnar Optiks pretty much owned a market monopoly for gaming and protective eyewear, manufacturing glasses that protect PC users from the negative side-effects to screen exposure. Gunnar Optiks glasses are designed to keep your eyes moist and safe while having extended gaming or working periods, ensuring you’re headache-free and there are as few negative side-effects from gazing at a screen for hours as possible.

That being said and done, Gunnar glasses didn’t have a reputation for being cheap, being priced around the $80 mark for most of its models. This is where the guys at NoScope came in, providing similar products for a lot less, having $19.99 or $29.99 prices on its models. While perhaps not as durable or high-end as the Gunnar models, NoScope’s glasses have received mostly positive feedback by both reviewers and users alike. Due to the affordable nature and proven efficiency of NoScope glasses, Gunnars is definitely feeling the pressure (and for good reason), as the former is taking a serious jab at a piece of the market. As a consequence, Gunnar Optiks has taken notice, and has filed a legal complaint, suing NoScope for alleged patent infringement.

The guys at NoScope quickly responded, claiming that there’s no way tinted glass lenses can be patented, and dismissing Gunnar’s claims as being nothing more than an attempt to reestablish its monopoly and drive competitors out. “It is our belief that Gunnar is primarily attempting to drive us – their new, thriving competition – out of business before we even have our first “birthday.” It is our understanding that we’re not the first of Gunnar’s competitors to be sued by the industry incumbent. In the business world, just like the gaming industry, fair competition is critical and should not be discouraged.” said NoScope’s owner and operations manager, Mr. Michael Agosta.

There’s no way of foreseeing how the entire claim of Gunnar will go down in court, but the situation seems awfully similar to last year’s King vs Stoic scandal, which was based on King suing Stoic over the use of the word “Saga”. The former is known for the “Candy Crush Saga” games, while the latter developed a TBS-RPG under the name “Banner Saga”. These are both good example of strong, leading companies bullying out smaller developers and competitors through sheer corporate and law-based force. Mr. Agosta also stated that it’s NoScope’s belief that manufacturing and developing their own protective glasses is well within their right, and offering them at a more affordable price is also their business-model and choice, and this right should not be contested by Gunnar Optiks. He added that a healthy competition is ultimately beneficial to consumers, who end up getting better and cheaper products.

We’ll keep you updated on the developments of this lawsuit as things unfold.

As long-time IT enthusiasts, gamers and gadget fanatics, Mark and I have been working in the industry for a long time and we both have a vast experience in dealing with smartphones, tablets, PC and console hardware and everything tech-related. My list of industry insiders is long-enough to allow me to get insights into what's going on in the technology field and provide my readers with interesting and timely updates. I focus on brief, to-the-point reporting, keeping the "bla bla" to a minimum and making sure my readers get easy access to important information and updates. I mainly specialize in Android-based mobile devices, leaving iOS and Apple devices in Mark's capable hands.
Previous Microsoft to deploy touch-screen fix for the Lumia 535
Next Tales from the Borderlands launches on Android