I’m sure many of you are aware of the outrageous $1,200 Sony Walkman that was launched at CES 2015, but did you know a Sony memory card that is specifically designed for audiophiles is also coming our way? Moreover, did you know that its price will be a couple of times the price of a standard memory card? I’m fairly sure you didn’t, but now you do. The new Sony memory card is going on sale in Japan according to the Wall Street Journal and it will cost $160 a pop, which is very expensive for a run of the mill memory card. But Sony’s offering is anything but run of the mill. You must be wondering what would warrant such a high price for a simple piece of hardware that has been around for years? Read on and find out.

The Sony memory card is not just any memory card, as the company says it is designed specifically with audiophiles (those that see the value in the expensive Sony Walkman) in mind. A spkeswoman for the company commented to the Wall Street Journal that “We aren’t that sure about the product’s potential demand, but we thought some among people who are committed to great sound quality would want it.” I like that statement, because it clearly markets the Sony memory card at a specific crowd that would be interested in such high-tech offerings, and will avoid the unwarranted outrage the Walkman’s price cause when it was launched last month. 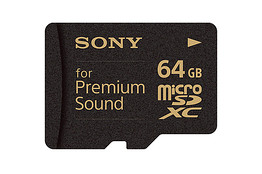 If you’re hoping that the Sony memory card will offer an enormous amount of storage, somewhere around 2 TB or something like that, you might be a bit disappointed. The memory card only offers 64 GB of space that you can fill up with your music library. But the memory card is supposedly going to produce less electrical noise when reading data, which is something I haven’t really encountered with standard microSD cards, so I don’t know how I would tell the difference, but alas, I’m not an audiophile. I stick to run of the mill products that are below $100 each, or get them second-hand (the best way to get them in my mind).

SR-64HXA is the model number or name of the Sony memory card, and it should go on sale in Japan starting March 1st, supposedly. The company hasn’t revealed much about the technology that makes the card “produce less electrical noise”, but we’re sure to find out more once it goes up for sale. We hope there’s some special tech in there, or else we can’t pinpoint where the $160 are going. As I’ve mentioned earlier, so far Sony said that the card will only be available on the Japanese market, but we have a hunch that it will be made available globally shortly after its initial launch. The thing is engineered for audiophiles, so we’re expecting their opinions in the comments below. Would you pay $160 for a microSD card that offers lossless audio with no electrical noise? Or do you think the description Sony offered about the product is vague so far? Are there any takers?

Hi fellow tech enthusiasts! I'm Mary. I enjoy writing about tech, but I love tinkering with gadgets more. If it can take a screwdriver, leave it to me to fix it (or brick it). I'm passionate about Android and I'm all in for Google, but I don't stray from Apple nor Windows, so I'll keep you up to date on everything mobile (or stationary).
Previous Pre-order the flexible LG G Flex 2 tomorrow, for a surprisingly cheap price
Next AT&T tracks the hell out of you, but you can pay to opt out