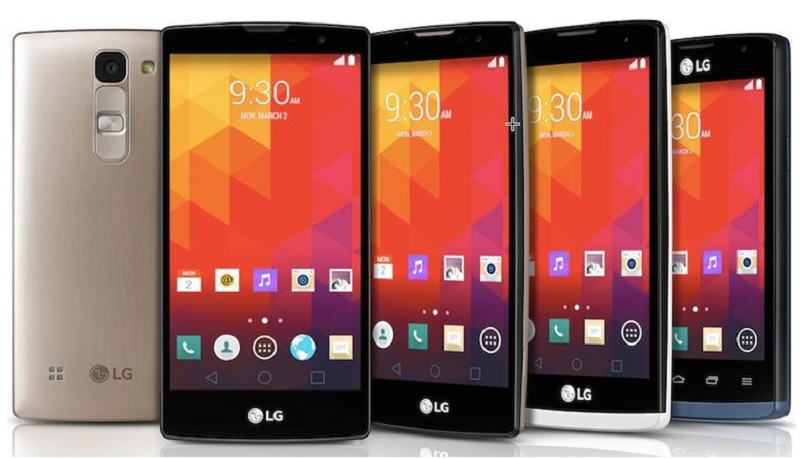 LG is coming to the MWC 2015 in March, but it seems the company couldn’t wait patiently to unveil their new smartphone line-up. LG has spilled the beans on four new smartphones it would be introducing at the MWC 2015 show, although all four of them are going to fit right into the mid-range segment of the smartphone industry. We know everybody is excited about the LG G4, but we hate to burst your bubble about that. The LG G4 is unlikely to make an appearance in Barcelona next week, as rumors say LG is going to try and avoid competing heavily against Samsung and HTC. Cnet managed to get hold of photos, as well as specs for all four LG devices set to show up at the MWC 2015 this year.

Nonetheless, LG will still introduce four new mid-range phones at their MWC 2015 booth, which is more than thin air, to be fair. These phones will have rather fun model names: Magna, Spirit, Leon and Joy. I personally like these names, but others might say they are a bit childish. These mid-range phones are going to try and tap into the market as studies have demonstrated that “flagship fatigue” exists and that is why many people are migrating towards mid-range and entry-level smartphones. These kinds of devices are also cheaper and can still perform rather well when used for daily tasks and as daily drivers.

The design of the new LG phones is rather appealing, which is no surprise coming from the South Korean company. Their mid-range phones have always been a tad on top of the market when it comes to design, many users praising their durability and soft plastic back panel. The Magna, Joy, Spirit and Leon aren’t anything out of the ordinary, but it seems this is all we will get in terms of LG smartphones at the MWC 2015. Let’s see what LG has revealed about each smartphone, shall we? Keep in mind that the specs are not final and we will have to wait until the MWC 2015 to get confirmation on them.

The LG Joy is my favorite so far, because I’m a joyful person so it would only be appropriate to call my phone “the Joy”. The phone is the smallest and most entry-level type in the line-up, as it comes with a 4 inch WVGA display that adds up to 233 ppi pixel density. The good news is that it will come with Android 5.0 Lollipop out of the box, powered by a 1.2 GHz processor and a 1900 mAh battery. The phone will have either 4 or 8 GB internal storage and around 1 GB RAM. The camera setup won’t be anything special, as LG slapped a 5 MP sensor on the rear and a 0.3 MP sensor on the front.

The LG Leon is just a bit larger than the LG Joy, sporting a 4.5 inch FWVGA display with a 220 ppi pixel density. Not much in the display department, sadly. It will most likely get an 8 MP or a 5 MP camera on the rear, supposedly depending on region, a 1.2 GHz quad core CPU, backed by 1 GB RAM and 8 GB internal storage and the same 1900 mAh battery. As we go to the LG Spirit, we can see that the new line-up is rather comprehensive and wants to target entry-level users. The Spirit has an even larger 4.7 inch HD display with a 312 ppi pixel density, which is already better than the Joy and Leon. It gets the same camera, processor and memory as the Leon, but its battery is bumped up to 2100 mAh.

Last, but not least, the largest of the line-up is the LG Magna, which comes with a 5 inch HD display that adds up to 294 ppi pixel density. Still not my cup of tea when it comes to display, as I like phablets more, but hey, it’s appropriate for a mid-range phone. The processor, camera and memory stay the same as with the Leon and Spirit, but the battery receives another big bump up to 2540 mAh.  Would any of you be interested in these mid-range LG phones or are you more eager to see the flagships at the MWC 2015? There are only a few days left until the show kicks off, so stay tuned for more!

Hi fellow tech enthusiasts! I'm Mary. I enjoy writing about tech, but I love tinkering with gadgets more. If it can take a screwdriver, leave it to me to fix it (or brick it). I'm passionate about Android and I'm all in for Google, but I don't stray from Apple nor Windows, so I'll keep you up to date on everything mobile (or stationary).
Previous Gemalto says SIM hacking fiasco isn’t a big deal
Next Apple wants to hire Samsung employees, it’s not a joke