Home / Gadgets / Toyota is not getting into Apple CarPlay right now 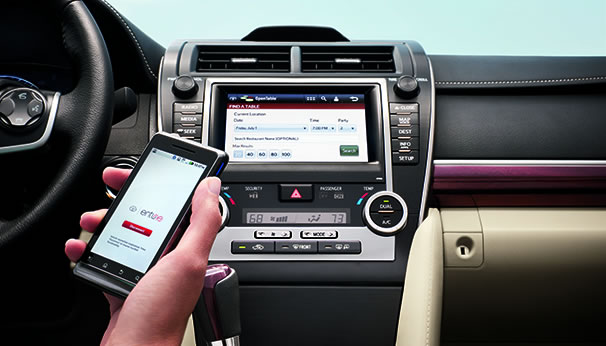 Toyota is staying with Entune, for now

Toyota is not getting into Apple CarPlay right now

Toyota is not interested in Apple CarPlay right now, so your hopes of having the infotainment system installed in a Toyota car are futile right now. In a report published by The New York Times, we find out that Toyota will be sticking to its own platforms for the time being. It’s not a definitive decision, though, as the car manufacturer might be open to infotainment systems in the future. It’s not completely unlikely to see either Apple CarPlay or Android Auto on Toyota machines in a couple of years, but it seems the company is confident in its own software solutions for now.

Toyota is rather proud of its Entune infotainment system, and it should be, because it is a comprehensive system which does offer integration with Android and iOS devices, so you’d be covered with basic functions. Toyota Entune is considered one of the best app-based systems that are available, so it’s no wonder the automaker is reluctant to adopt other technologies. As Toyota is already a big name in the electric car industry thanks to the Toyota Mirai, we’re looking forward to seeing more innovative software and vehicles from the company, just not in partnership with Google or Apple.

Other major car manufacturers like BMW, Volvo, Audi, Bentley, Chrysler, Dodge, Alfa Romeo, Mercedes-Benz, Subaru, Skoda, Seat, Suzuki, Volkswagen, Renault and more are already offering compatibility with either Apple CarPlay, Android Auto or both of the system. Most major companies offer the latter variant as they are correctly aware of the fact that cars need to cater to all smartphone users, not just one segment of them.

The reluctance of Toyota adopting CarPlay or Android Auto comes as proof that the company is rather confident in the Entune system and most likely will keep upgrading it in the future. The most appreciated features in the Toyota Entune system are the effective local search apps, the very accurate voice activation and the fact that it doesn’t require a separate data plan. Some users might not love the menu structure integrated within the user interface, but that’s something one can get used to in time. Within the Entune Audio Plus system, one gets one of the most comprehensive infotainment systems on the market.

The package contains a 7 inch display for ease of use, AM/FM/satellite radio and CD unit, USB port, aux jack, Bluetooth, HD radio, HD predictive and Doppler weather and the whole Entune App Suite. Bing and Yelp come by default with Toyota’s system, so that you can perform all the searches you want with voice commands. Pandora and iHeart Radio, Open Table, MovieTickets, Facebook Places and a slew of other apps for checking stocks, sports, email, weather and traffic are all included in the suite, so that you can easily access any and all information you might need while driving, most through voice activation. Even though the system is rather expensive, it’s not that for out and you can get this Audio Plus version for around $700.

With a comprehensive system like that, Toyota is right to keep customers happy with Entune, but we’re curious to see how it will shape up in the future compared to Apple’s and Google’s offerings. We are rooting for Toyota’s own system in this case, because it really doesn’t need a separate data plan, which is very cool, but only if the company will update the software and change things for the better in the future, as the system does come with the occasional issues.

Hi fellow tech enthusiasts! I'm Mary. I enjoy writing about tech, but I love tinkering with gadgets more. If it can take a screwdriver, leave it to me to fix it (or brick it). I'm passionate about Android and I'm all in for Google, but I don't stray from Apple nor Windows, so I'll keep you up to date on everything mobile (or stationary).
Previous Youtube Kids launched for both Android and iOS devices
Next Blogger sites containing nudity will be made private soon