Home / Gadgets / Swatch smart watch gets real and down to Earth 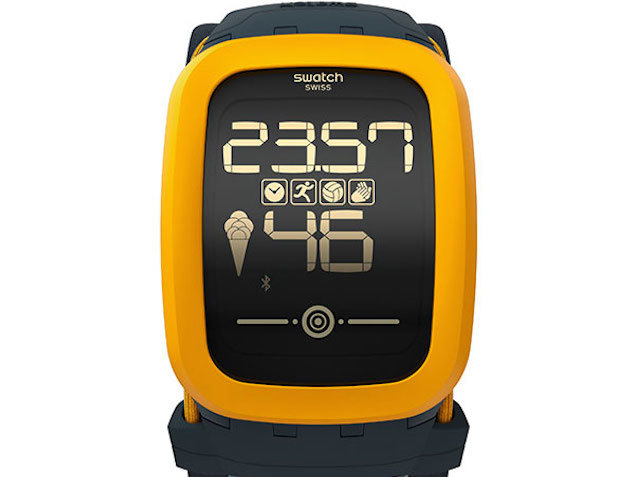 Swatch did not just launch a smart watch

Swatch smart watch gets real and down to Earth

Swatch promised that it would launch its own smart watch this year, saying that it has been working on something long before Apple ever began its work on the Apple Watch. The day when Swatch gives in to the new smart watch market has come, and it has materialized in the form of a niche device, launched at the MWC 2015 show today. Swatch decided that instead of following in the footsteps of Android Wear, the Apple Watch and smart watches in general, it would approach things differently. Swatch didn’t make an actual smart watch, rather it made a niche-device specific to a certain kind of people: beach volleyball fans.

How many of you out there play beach volleyball? I don’t, but if you’ve been a TechGadgetCentral reader for the past few weeks, you probably know that I’m lazy. Anyhow, Swatch decided that it would be better for the company if it targeted specific groups of people who would have genuine interest in a wearable that would increase their performance, or at least keep track of it. The Swatch Touch Zero One (mouthful, that name) is the newest wearable at the MWC 2015 as we’ve seen the HTC Grip demoed, the Huawei Watch introduced alongside the Huawei TalkBand B2 and N1 and we’re looking forward to seeing more.

The Swatch Zero Touch One (the name kind of reminds me of Alcatel and their One Touch line, not very inspired) gets a curved monochrome display which looks a lot like the display on the Samsung Gear S, save for the colors, which are not there. The display has a built-in backlight for your convenience, and it comes with touchsceen input. You can do taps, swipes and side-swipes, but you can only manage timing functions by doing so from what we gather.

We’re not sure what platform the Swatch smart watch is running on, nor what platform it supports, but a fair guess would be that it can connect to both Android and iOS smartphones. As you can tell by the niche it targets, the Zero Touch One is more of a fitness tracker than a smart watch, as we’re not seeing any notifications support anywhere. Still, you get niche-specific features, which sound pretty interesting: the watch can keep track of how many times you’ve hit the ball when playing beach volleyball, and it can actually differentiate between your hits based on their intensity. The weird thing is is that it can measure how much force you hit the ball with, and it can give you grades from 1 to 100, which sounds really motivating. Imagine the Swatch watch laughing at you for hitting the ball with less than a G of force. Or something, I’m not really good at that, but I’m really good at imagining a smart watch laughing at you when playing volleyball.

That all sounds swell, but it’s not the most interesting part of the timepiece Swatch is offering. According to the watchmaker, the Zero Touch One battery will “last for months and months”, which is remarkable. We haven’t found out too much about this wearable yet, but be sure to follow us, because we’re going to be keeping an eye out. I’m curious to see whether it’s got NFC, Bluetooth, notifications and what kind of smartphones it can pair up with. Maybe it doesn’t need a smartphone, because it’s so cool. Anyway, it’s waterproof, which is great, and it performs all the task you would expect from a fitness tracker, plus it counts claps. It’s not a looker, though, consider yourselves warned.

Hi fellow tech enthusiasts! I'm Mary. I enjoy writing about tech, but I love tinkering with gadgets more. If it can take a screwdriver, leave it to me to fix it (or brick it). I'm passionate about Android and I'm all in for Google, but I don't stray from Apple nor Windows, so I'll keep you up to date on everything mobile (or stationary).
Previous Microsoft launches cross-platform foldable keyboard
Next HP, or rather Microsoft releases the Spectre x360