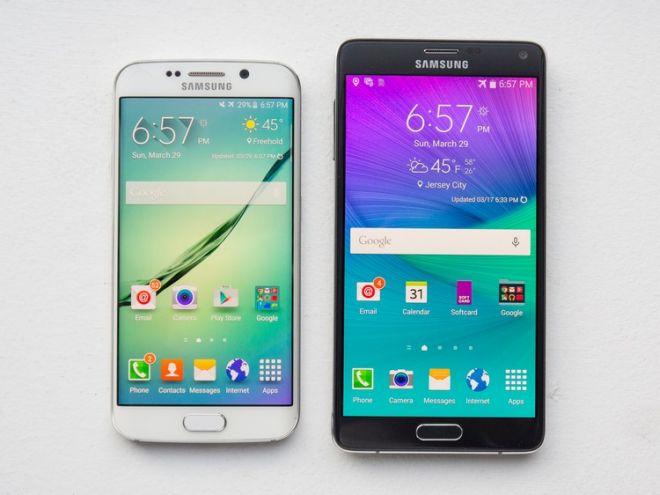 The Samsung flagships go head-to-head in the “Battle of displays”, the Samsung Galaxy Note 4 and the Galaxy S6. Perhaps for the first time ever in a Samsung vs Samsung we are looking at metal frames on both devices. These are design choices that you may have already seen in the Galaxy Alpha, but now they are becoming standard for Samsung smartphones.

We start with the Note 4 which is a Samsung phone through-and-through with its leather plastic back which is also removable so you can get to the replaceable battery and the microSD card slot. The signature Samsung layout is up front with the tactile home button and the integrated finger scanner underneath and of course we have the S Pen in the corner. The Galaxy S6 may retain the signature Samsung design elements, but Samsung has certainly moved on in terms of build material. Now favoring that metal frame and glass back combination for premium look and feel in the hand. What you will notice about the middle frame on the Galaxy S6 that its still retains some would taper raised look on the top and bottom corners that were originally introduced in the Galaxy Note 4, which is really nice.

The design choice is not without compromises tho, in the S6 the battery is not replaceable and there is no option for microSD card expension, because the backing is of glass rather than a plastic and it is not removable. This is something that i think many fans are going to miss about the S6. The camera module also tends to stake out quite a bit as well which could be a problem when laying the phone flat on the surface.

The playing field is evened out on the display front with the Note 4 and the Galaxy S6 featuring Super AMOLED displays, as per usual for Samsung devices, but now with Quad HD resolution. The only real difference is being in size, 5.7 inches for the Note 4 and 5.1 inches for the Galaxy S6, but the pixel density’s also differs from 515 to 577 so that’s a bit of a sizable difference. When you look at these two devices side-by-side the differences isn’t actually all that noticeable.

Tech Editor with lots of experience with PC hardware components, iOS and Windows-based mobile devices, and love keeping myself up-to-date with any developments in the industry, which I make my job in sharing with you, our readers.
Previous VoIP technology and data services golden age
Next Microsoft Band vs Fitbit Surge vs Basis Peak – Battle for tracking