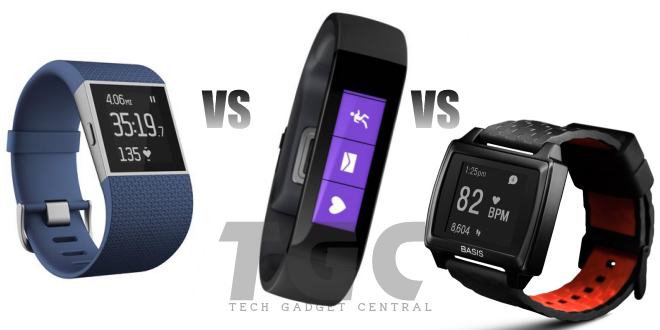 The new breed of fitness trackers called super watches, these super watches like Microsoft Band, Fitbit and Basis that are tracking not only physical metrics and physical data about you and your workouts, but they are also providing some smartwatch like capabilities.

There has been 3 different devices by three different companies that are contending for this number one fitness tracker position, they are: Microsoft Band for the price of $199, Fitbit Surge price $250 and the Basis Peak priced at $199. All 3 of them promise to do heart rate tracking, not just while you work out, but 24/7 while you sleep, while you are doing normal everyday activities. They also all promise to do sleep tracking abilities so you can go back and monitor to see what kind of sleep you got for the night.

Microsoft Band, Fitbit Surge and Basis Peak what do they got in common?

We are going to talk about features and functionality and how they compare in contrast with each other. So let’s start with their displays. The screen on the Microsoft Band is a 1.4 inch color screen, that is contrasted with the Fitbit and the Basis which both have 1.25 inch monochrome LCD displays. The Basis Peak and the Fitbit Surge both have the ability to receive calls and txt notifications, The Microsoft Band is able to do both call and txt notifications as well as integrate wuth email and social media like Twitter and Facebook.

The Fitbit and the Basis Peak are completely water proof and the Microsoft Band is just water resistant, so it is not recommended to take it into the pool or shower. All 3 fitness trackers have haptic feedback, vibrating motors for notifications, however only the Microsoft Band and Fitbit have a vibrating alarm to wake you up in the morning.

The Fitbit Surge has the best battery life with up to 6 or 7 day usage, the Basis Peak has from 4 to 5 days of usage and the Microsoft Band battery life will only last for about 1 or 2 days of solid use. In regards of fitness and calories tracking all three have a 3 access accelerometer which is pretty standard on any tracking device nowadays and all 3 of them have heart rate monitoring that is continuous through out the day. These watches, fitness trackers are actually different, they might appeal to different demographics or people that work out in different ways, shapes and forms.

I am passionate about gadgets and everything tech related.
Previous Samsung Galaxy Note 4 vs Galaxy S6 – Battle of displays
Next Windows Control Panel – useful features