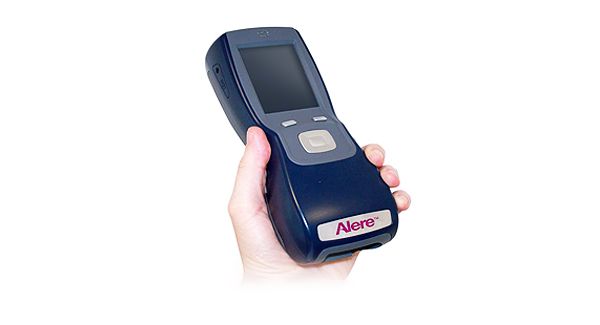 Is there a portable device to check people for the influence of drugs?

Meet Assembly Bill 1356. If passed, this would allow law enforcement, in California, to use a gadget to check drivers for different types of drugs. This is something out of this world. Here, drivers would have to give their consent in the chemical testing of their blood or other bodily fluids.

According to Government Technology, the gadget is called the DDS 2 Mobile Test System. As the Alere website says, “The system is lightweight, portable and compact with a full colour screen, readable day and night. The analyser can store 10,000 results which can be printed at the end of the test or reprinted from memory.”

There are a few concerns for the bill.  For instance, there is no funding for it. If the police departments in California want this tech, they’ll have to pay out of pocket. It was put up for reconsideration on May 5, but as of May 8, no new developments. There was another concern in which it was stated that the DDS 2 could affect medical marijuana patients.

In a statement to Government Technology, Assemblyman Tom Lackey, said, ““The facts have proven that we’ve become effective in identifying and removing the drivers impaired by alcohol, but in the other issues that are impairing people, we have a ways to go. This is a tool that would allow the officers to have the same kind of ability to make objective calls, and be more accurate in their depiction of other intoxicants outside of alcohol.”

What do you guys think? The device would be beneficial to cops patrolling high risk areas, or catching motorists on the highway. Lackey has stated in the article that DDS 2 is “not setting new limits for drug intoxication.” Do you agree with that? Let me know what you think in the comments.

Smartphones, tablets, laptops, drones, smartwatches my goal is to review them all.
Previous Microsoft Edge Browser is worth trying
Next Sony Xperia Z4 Compact could be announced next week, release date still unknown