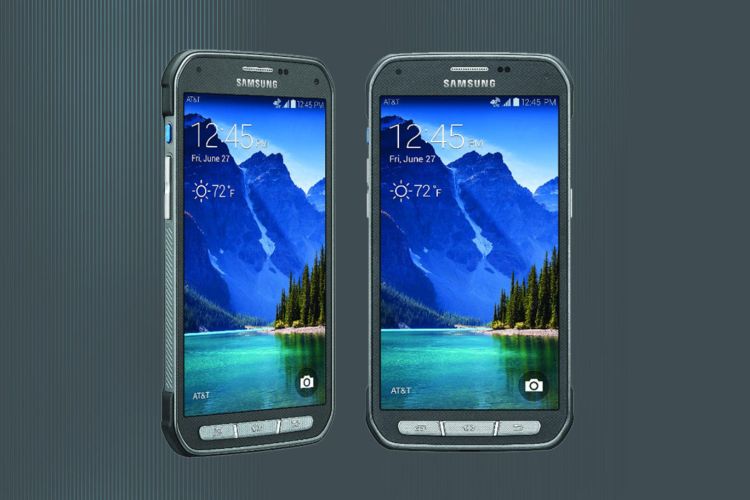 As it was already expected, we found new details about the Samsung Galaxy S6 Active Smartphone version. Although Samsung has not yet announced anything officially, the first images with Samsung Galaxy S6 were already spread over the Internet. There are no details about the internal hardware. By continuing the tradition of the active models, S6 version will be more resistant to accidents and it will have a different design. In the same time, it will try to reach the same performance level of the base version.

Samsung S6 active does not seem very different from S5 active. It is built from tougher materials than Samsung Galaxy S6 and Samsung S6 Edge. S6 active has practically given up to the bottle construction for a rougher material. The images from the Internet show 2 color options, black and white. Both offer a camouflage design on the back cover. The margins are protected by a tough plastic and the housing appears to be reinforced by bolts. Another image, which seems to be a spy photo, shows a black colored casing, with the cover models with AT & T branding.

The front of the Galaxy S6 smartphone is similar with the standard version, but the rounded corners of the device are now a little sharper. Capacitive buttons “back” and “recently” were transformed into physical buttons and the main switch is “home”, which gives up to the fingerprint reader. It is not clear whether the internal hardware of the Galaxy S6 and S6 edge will be retained. So, the display resolution, the processor, the amount of RAM and the internal storage space are still a mystery. Unofficial information suggests technical specifications identical to those of Samsung’s flagship, but the only detail the images recorded is the internal battery capacity: 3500 mAh.

As long-time IT enthusiasts, gamers and gadget fanatics, Mark and I have been working in the industry for a long time and we both have a vast experience in dealing with smartphones, tablets, PC and console hardware and everything tech-related. My list of industry insiders is long-enough to allow me to get insights into what's going on in the technology field and provide my readers with interesting and timely updates. I focus on brief, to-the-point reporting, keeping the "bla bla" to a minimum and making sure my readers get easy access to important information and updates. I mainly specialize in Android-based mobile devices, leaving iOS and Apple devices in Mark's capable hands.
Previous Smartphones Detecting Eye Cancer?
Next New Gmail login screen from Google