Home / Smartphones / Firefox browser for iOS is in Beta stage 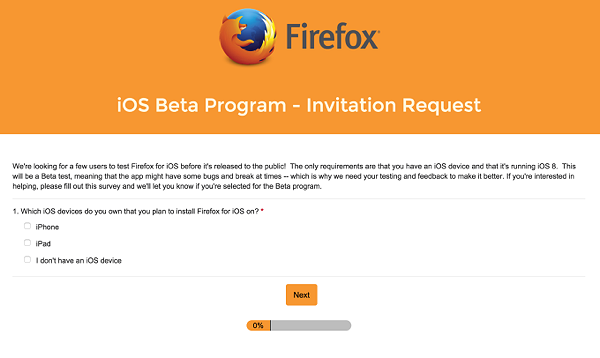 Firefox browser for iOS is in Beta stage

Mozilla has rejected, for a long period of time, the idea of bringing a Firefox browser for iOS, despite the fact that Apple phones and tablets were the most popular mobile terminals used for browsing. Still, after much thinking, Mozilla announced last year, in December, that they will produce a Firefox browser for iOS. For the time being, it seems that the browser reached the Beta testing phase.

Initially, Mozilla did not accept to develop a browser for iOS because of the artificial limitations set by this Apple OS. Those limits do not let a browser to integrally migrate from other mobile or desktop platforms. Firefox can not use its own display engine, Gecko, so that the developers are obliged to use the default WebKit or to develop a cloud processing solution, as the one used by Opera Mini.

Mozilla is very proud of Gecko and SpiderMonkey, but they were needed to come to a compromise, in the end. It is very true that Mozilla has created for iOS, a few years ago, Firefox Home, which was a manager for your favorite sites and accounts but it was not a real complete browser, as Firefox will be now.
As we were announced on an official Firefox blog, iOS version is now in Beta testing phase and it requires users that are interested to test it. The code for this product is already published in GitHub and an early compiled version will be offered to those who are interested, in the near future. Mozilla did not offer other details about the product but it announced users who want to test the browser on Apple mobile phones and tablets that is mandatory for them to use iOS 8 version.

As long-time IT enthusiasts, gamers and gadget fanatics, Mark and I have been working in the industry for a long time and we both have a vast experience in dealing with smartphones, tablets, PC and console hardware and everything tech-related. My list of industry insiders is long-enough to allow me to get insights into what's going on in the technology field and provide my readers with interesting and timely updates. I focus on brief, to-the-point reporting, keeping the "bla bla" to a minimum and making sure my readers get easy access to important information and updates. I mainly specialize in Android-based mobile devices, leaving iOS and Apple devices in Mark's capable hands.
Previous Asus has prepared a new series of ZenPad tablets
Next Microsoft’s Leaked Productivity Apps