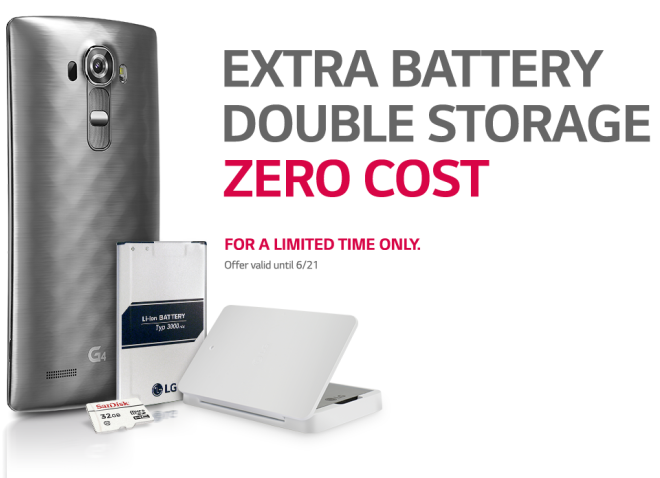 The LG G4 is supplying what people are demanding

This year’s QHD flagship, although not the only one, is the LG G4 and it’s already quickly becoming one of the most popular smartphones on the market. LG is set on making it “the most popular” smartphone, though, as the company announced that for those who order the LG G4, they won’t be getting just the phone itself, but a few extras. These extra accessories that LG decided to include in the LG G4 package represent everything that users were not happy with about the Samsung Galaxy S6 and the HTC One M9, so LG has a good strategy going right there. You can find out more about the promo and how to make use of it on the official website.

For U.S. customers who order until June 21, 2015, the LG G4 package will come with an extra battery and a microSD card of 32 GB storage. Moreover, these lucky customers will also get a battery charging cradle that’s rather stylish in the package, so it sounds like a pretty neat deal. The removable battery of the LG G4 is one of the features that were missing from the Samsung Galaxy S6 and the HTC One M9 and the company seems to have recognized the demand for it before releasing the LG G4.

At the same time, no microSD storage on the HTC and Samsung flagships prompted users to be very vocal about their storage habits and there were lots of discussions and rows in forums about whether expandable storage is outdated or not. Each side got some good arguments in, but the best argument LG came up with is: demand. People want microSD card storage, even if they make up only a percentage of their target audience.

With the LG G4, those who want to have a removable, replaceable battery because it is convenient, will have one and those who want to be able to swap out microSD cards and store their media on them will have the option too. LG is going about this promotion extremely well, and we honestly feel compelled to take advantage of it. Since the promo is only available until June 21, you should hurry up and get your hands on it.

Hi fellow tech enthusiasts! I'm Mary. I enjoy writing about tech, but I love tinkering with gadgets more. If it can take a screwdriver, leave it to me to fix it (or brick it). I'm passionate about Android and I'm all in for Google, but I don't stray from Apple nor Windows, so I'll keep you up to date on everything mobile (or stationary).
Previous Galaxy A7 Gets the 5.0.2 Lollipop Update
Next Shazam adds augmented reality and visual recognition to its features