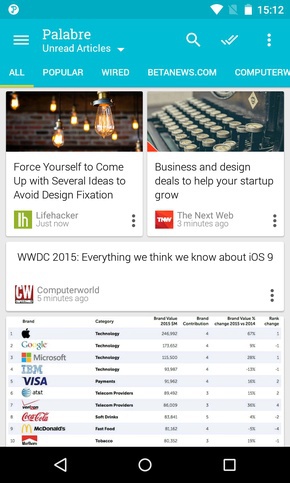 Application of the week: Palabre

When it announced it would close the Reader service, Google said that one of the main reasons behind decision was that service was no longer popular. It’s true, RSS technology has never been popular for the public, and Facebook and Twitter have further undermined the usefulness, but the Android users who might still use it for aggregation and news reading could take a look to Palabre.

After the disappearance of Google Reader, some companies have tried to provide RSS aggregation services that could offer the same features and modes that users were already used to. While not considered the best by all users, Feedly is certainly the most popular replacement for Google Reader, but its native application is not exactly brilliant. Palabre tries to make up some of its shortcomings and it uses the same Feedly infrastructure for synchronization, making it a useful alternative, but those who still prefer an independent work mode can opt for the local simple adding of the RSS desired addresses.

For the Material Design fans, Palabre is an attractive option because it seamlessly integrates itself with Android 5.0 graphical environment. The application uses the design lines recommended by Google for the cards with content, animations, menus, tabs and buttons. The interface fits to the level of the actual demands for an Android product that is built to the highest levels. True, the color palette is perhaps not too great and the menu from the superior upper side seems a little bit crowded, but Palabre still probably remains the best looking RSS client from Google Play.

Developed by LevelUp Studio, the company behind the famous Beatiful Widgets and Plume, Palabre is a very attractive Feedly client for those who are not satisfied with the range of options offered by the standard application of service. In addition, knowing the company’s history, we can assume that Palabre will be constantly improved with the same care as the two software products listed above.

Palabre is a free product that can be downloaded from Google Play and the removing of the ads space space costs around 3 dollars only.

As long-time IT enthusiasts, gamers and gadget fanatics, Mark and I have been working in the industry for a long time and we both have a vast experience in dealing with smartphones, tablets, PC and console hardware and everything tech-related. My list of industry insiders is long-enough to allow me to get insights into what's going on in the technology field and provide my readers with interesting and timely updates. I focus on brief, to-the-point reporting, keeping the "bla bla" to a minimum and making sure my readers get easy access to important information and updates. I mainly specialize in Android-based mobile devices, leaving iOS and Apple devices in Mark's capable hands.
Previous Google Inbox, the new e-mail client from Gmail, entered the public testing phase
Next Huawei Honor 7 release date pegged for June