Home / Smartphones / Samsung’s Galaxy A8: Too Good to Be True? 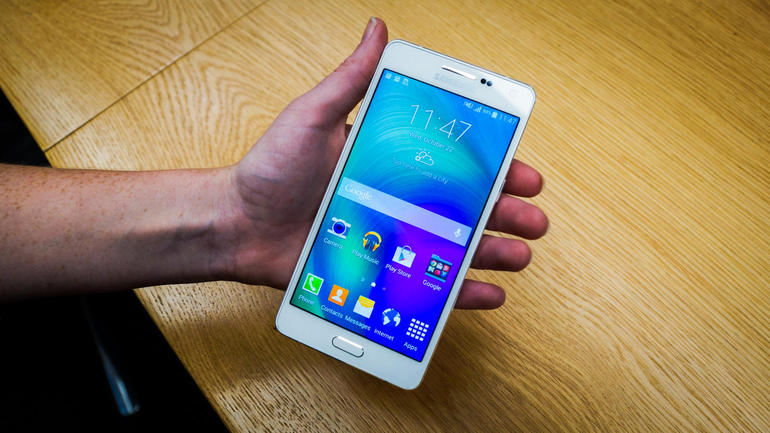 Samsung’s Galaxy A8: Too Good to Be True?

While there has been no official announcement from Samsung on their newest smartphone, a video has surfaced on YouTube showing off their latest device: the Galaxy A8. Although rumors have long been surfacing about this device, we may have physical proof of it.

The hands-on video was posted by YouTube user Steve Hemmerstoffer, who demonstrated the phone’s capabilities. While it’s the text is in a different language, multiple sites have translated the specifics, making it easier for people to understand.

So what kind of specs were mentioned? Aside from it’s 5.7-inch 1080p Super AMOLED display, the smartphone will be running on a 64-bit octa-re Snapdragon 615 processor. Within it will be 2 gigabytes of RAM and even 16 gigabytes of internal storage space. The phone will also have a 16-megapixel camera, with a 5 megapixel secondary camera. And the A8 will have 4G LTE connectivity, a 3,050 mAh battery, along with a newer version of TouchWiz (let’s not forget it’s OS will be the Android 5.1.1 Lollipop).

According to SamMobile the device will supposedly be the thinnest Samsung phone. They reported that, “Samsung had to cut some corners to make that happen, and the ISOCELL camera sensor (LSI3P3) used in the Galaxy A8 has a reduced pixel size of 1.0 µm, and an overall thickness of the module is just 5mm.” Compared to the Galaxy Note 4, this makes the A8’s camera sensor 23% thinner. However, users should be expecting low image quality due to a smaller pixel size.

Despite the leaked images and specs, it’s important to note that Samsung is slowly defeating itself. As Mobile Choice UK points out, “Samsung’s propensity of releasing new devices one after the other usually makes some of them obsolete within months of their release.” It was not too long ago that the A7 was released, and the website has reported that the A7 has barely penetrated the mid-range market.

Until Samsung can confirm some of the rumors, and even the video, it’s safe to continue treating the information we receive as rumors. What are your thoughts on this? Let me know in the comments below.

Smartphones, tablets, laptops, drones, smartwatches my goal is to review them all.
Previous Can You Feel the Beat? GarageBand Update Has Some Tight New Features
Next You Can Finally Run Android Apps on Mac