Home / Hardware / Samsung Galaxy Note 4 vs. Galaxy S6: Taking Notes on the Side 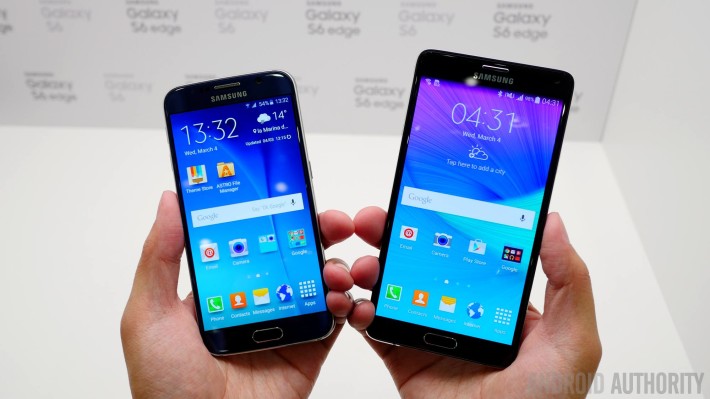 Samsung Galaxy Note 4 vs. Galaxy S6: Taking Notes on the Side

In the spirit of the Samsung Note 5 coming out (soon), it’s fitting to see how it’s predecessor, the Galaxy Note 4, compares to some of the other notable Samsung devices, particular the Galaxy S6. While both devices were released some six months apart, they have specs that make them unparalleled against their competitors. But how well do they stack up against each other? TGC leaves that up to you with this comparison.

Design-wise, you’re still looking at a “premium” feel for both devices. The Galaxy Note 4 has an aluminum/textured polycarbonate metal with a customizable plastic backing, while the Galaxy S6 has glass on rounded metal. However, whereas you customize the back of the Note 4, you’ll be forced to pick up a case for the S6 in order to give it a little of your own flair.

One of the major flaws that the Galaxy S6 had was the non-removable battery. Compared to the Note 4, who had a removable battery, a lot of Samsung fans were disappointed, but the S6 had wireless charging, which the Note 4 did not possess. However, the unique advantage of having a removable battery allows the users to pack spare batteries. If the phone dies, they can just pop another in, which you can’t do on the S6, especially if an electrical outlet is not available.

Displays is interesting. As we know, the Galaxy Note 4’s 5.7 inch Super AMOLED screen (resolution of 2560 x 1440 and ppi of 515) is incredibly useful for people who want to watch videos on the go. At the same time, it’s display allows the use of the S-Pen, where you take notes, underline important information, and a slew of other things that you simply won’t find on the Galaxy S6. But, to be fair, the S6’s 5.1 inch display has the same resolution but a much denser ppi (557 if we’re not mistaken).

Camera’s are both 16 megapixels with optical stabilization. But, the S6 has widened aperture and a very superior focus when it comes to taking the shot.

Both phones have their ups and downs, and it depends on what you want to use your device for. The Note has a slew of capabilities for something that lasts you, whereas the S6 is compact, it’s small, and works well. What are your thoughts on both devices? Let me know in the comments below.