The Ulefone Be Touch 2 is the most recent affordable flagship from the Chinese company Ulefone. While the phone is interesting and well worth the price, what many of you might not now is that you can get certain benefits with it if you choose the right retailer. Everbuying is the moment’s retailer, as it has some great promotions for those looking to buy the Ulefone Be Touch 2.

If you go to Everbuying and buy the Ulefone Be Touch 2 with 3 GB RAM and 16 GB internal storage, you’re going to pay $230 with free shipping and 2 years of warranty included, but that’s not all. If you opt for this promotion, you will also get a free 32 GB microSD card, a free ultra thin TPU case and a free tempered glass screen protector in your package. For $230, that sounds like a pretty neat deal.

But that’s not the only Ulefone Be Touch 2 deal that Everbuying has going on at the moment. You can also buy the same offer with all the free stuff for only $199 if you use the coupon code BT2EB. Also, if you’re not in the market for free things, still want to buy the Ulefone Be Touch 2 and save a little money, all at the same time, you can use the coupon code EBUlefone on your purchase on Everbuying and get the phone with no gifts for $173. It’s up to you.

The Ulefone Be Touch 2 was launched with a considerable hype preceding it as the company focused their attention to marketing the phone internationally. The phone is rather cheap compared to the competition and it does have a considerable amount of features that you’re getting besides the free stuff.

First off, the Ulefone Be Touch 2 comes with a 2.5D 5.5 inchArc screen with an FHD resolution of 1920*1080. Under the hood, the handset runs on a Mediatek octa core MTK6752 CPU backed by 3 GB RAM and 16 GB internal storage. It has two SIM card slots, one of which can be used for microSD storage as well, depending on your needs. 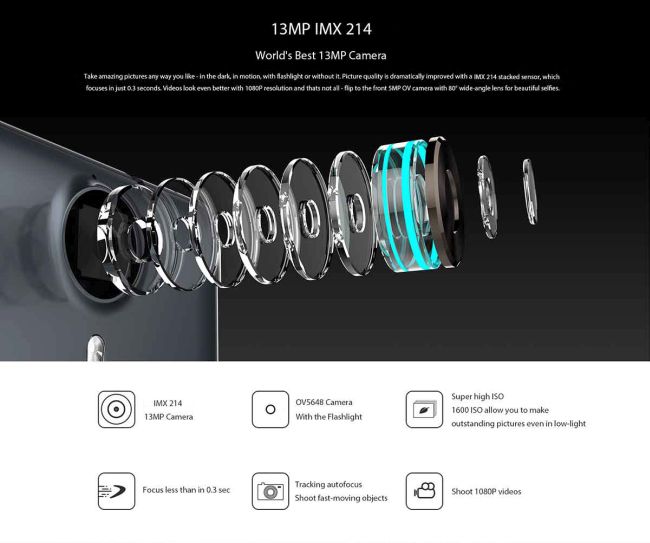 The Ulefone Be Touch 2 camera is comprised of a 13 MP sensor on the rear complete with autofocus and LED flash and a 5 MP front camera. A 4G LTE antennae is also part of the hardware specifications of the Ulefone Be Touch 2. The battery measures a pretty hefty 3050 mAh, which seems to be enough to keep the handset afloat for 2 days on moderate use.

Extra features that buyers will get with the Ulefone Be Touch 2 include a capable fingerprint sensor embedded in the home button of the device. Android 5.1 Lollipop with a minimal skin from Ulefone are also part of the grand scheme. The virtually bezelless display and curved edges of the phone make the Ulefone Be Touch 2 seem like a wonderous device that will look good in any conditions, even with a case.

Tech Editor with lots of experience with PC hardware components, iOS and Windows-based mobile devices, and love keeping myself up-to-date with any developments in the industry, which I make my job in sharing with you, our readers.
Previous Tablets, power banks and smartphones for less than $10 – Sales fest
Next Wearable game on point with the NT08 smart watch/smartphone