The iRadish Y6 is not the most popular smart watch out there, even though it takes a few design elements from one of the most popular wearables: the Apple Watch. Up front, when you first take a look at it, the iRadish Y6 is strikingly similar to Tim Cook‘s new device, but under the hood, it is inherently different. Whether that difference is good or not you’ll find out below.

I’ve been using the watch for more than a week now, so we can consider this iRadish Y6 review an in-depth one, explaining to you guys how such a wearable is supposed to be used and how one can personalize their user experience with it. Before getting into the details of the iRadish Y6 and the user experience it has to offer, let’s see what impression its design and features leave with the customer on a first try and what pricing has to do with everything.

You can buy the iRadish Y6 smartwatch phone from GearBest, and its price is only $34 unlocked. Since GearBest also offers free shipping, the entire deal sounds interesting and pretty worth the involvement. If you choose to have the device delivered by post, you’re going to have to wait a couple of weeks (a month, tops, like with most Chinese retailers), but if you choose to have it delivered through a courier service, it will arrive to you in a week.

Keep in mind that usually when you order by post, you won’t have to pay any more fees or taxes, but if you order by courier, you might have some hassle to deal with. Make sure to look customs fees and VATs up before ordering so that you can estimate the total cost of your purchase as correctly as possible. 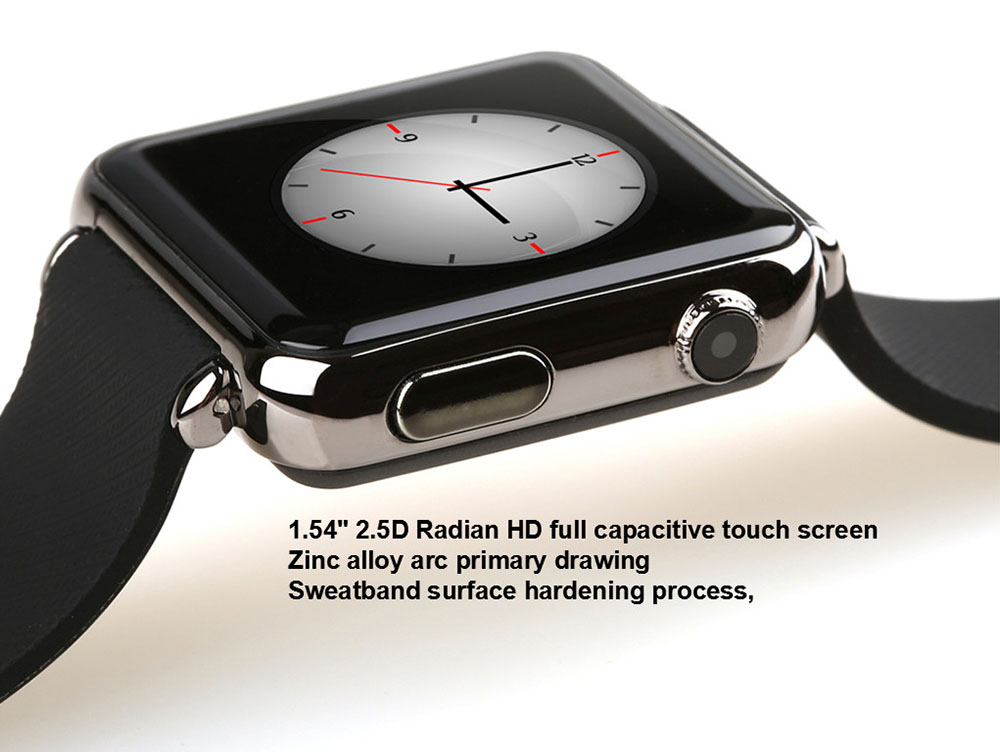 The design of the iRadish Y6, as mentioned earlier, is very similar to the design of the Apple Watch, with a few key differences. The watch body is made out of metal and plastic, so it’s sturdy enough to keep its shape, form and endurance for a long time. Although a bit bulky, the watch will be a comfortable fit for almost ayone. I have small wrists and hands, so the watch looks a bit big on me, but that won’t be the case with most of you.

Wearing the watch is comfortable enough, although it does take some getting used to. The watch band is comfortable and it doesn’t cause any rashes, which is appreciated. Fitbit and the Apple Watch had their fair share of rash issues with customers, but the iRadish Y6 has no such issues. I exercised, biked and endured 100 deegrees Fahrenheit weather without a problem with the watch on my wrist. Although the trapped sweat under the watch band wasn’t comfortable, it didn’t cause the discomfort a rash would.

Still, wearing anything on your wrist while exercising in high heat will be uncomfortable, so I’m not holding that against the iRadish Y6. The watch band is adjustable and has a lot of pinholes so that the lenght can be adjusted perfectly, which is something many accessory makers forget about.

The display is encased in bezels on each side, with a rectangular shape. Pretty standard appearance, right? Some cheap smart watches and wearables in the price range of the iRadish Y6 tend to have defects or mistakes such as the screen not being in the middle of the watch or the ports not being lined up perfectly, but I haven’t had these kinds of problems with the iRadish Y6.

On the sides, the smart watch comes with a power button that is used to turn the device on and off, as well as for navigation, replacing the back button you would have on a smartphone. Next to the power button, the iRadish Y6 touts a VGA camera, which you can barely notice. On the other side, we can access the microUSB port through a flap, and that is used for charging and file transfer.

On the bottom and top sides of the iRadish Y6, we are greeted by a metal frame that is sleek and shiny and not much else. The back panel of the device is easily removable, hiding the battery, microSD card slot and microSIM card slot. The battery itself is removable as well, although I don’t know where one could find retail replacements. I’m sure there are a few out there which might be compatible with the 350 mAh battery that the iRadish Y6 comes with.

Tech Editor with lots of experience with PC hardware components, iOS and Windows-based mobile devices, and love keeping myself up-to-date with any developments in the industry, which I make my job in sharing with you, our readers.
Previous Asus ZenFone 2 Deluxe now available for preorder for $270
Next iRadish Y6 smartwatch phone giveaway