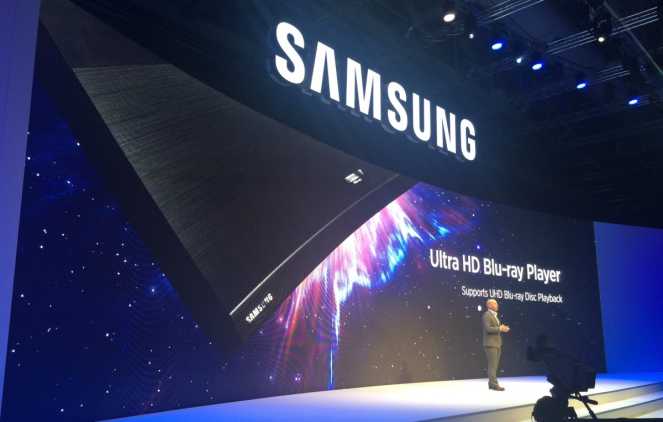 Still on the bench whether or not 4K is really going to pick off? Well, Samsung certainly seems to think so, as the tech giant has just revealed its brand new UHD Blu-Ray player. The company has announced the new Blu-Ray player at IFA 2015, an event that we’re all excited about. Anyway, enough about our own excitement, and more on the subject at hand. To better understand the necessity of the move, a bit of context is required.

4K gaming has already been taking off, but it’s still a relatively limited phenomenon, with very few people actually spending the – let’s face it – extremely significant amounts of money on the required screens and hardware. For movies however, the next step does indeed seem to be UHD Blu-Rays. 4K TV’s have been getting consistently cheaper, and recently, 20th Century Fox announced that it would be releasing some of its newer blockbusters on UHD Blu-Rays. Titles like the unexpected hit Kingsman: The Secret Service (starring Taron Egerton and Colin Firth) will be among the first films to be released on this UHD format. So we have TVs, we will be getting movies, so what do we play them on?

Here’s where Samsung steps in, revealing its new, stylishly curved and probably fairly expensive UHD Blu-Ray player. The device will be able to play films at 4 times the resolution of current Blu-Ray discs, not to mention 64 times higher color expression. Additionally, all UHD movies will support High Dynamic Range (HDR), so expect a major leap in viewing quality. Pair that with a decent curved 4K TV (yes, Samsung makes those too) and you might just skip on crowded cinemas for awhile. Last but not least, the UHD Blu-Ray player will also support 4K streaming, so if you already have the TV for it, there aren’t any reasons you should skip this one. Pricing hasn’t been detailed yet, but don’t expect it to be too cheap.

As long-time IT enthusiasts, gamers and gadget fanatics, Mark and I have been working in the industry for a long time and we both have a vast experience in dealing with smartphones, tablets, PC and console hardware and everything tech-related. My list of industry insiders is long-enough to allow me to get insights into what's going on in the technology field and provide my readers with interesting and timely updates. I focus on brief, to-the-point reporting, keeping the "bla bla" to a minimum and making sure my readers get easy access to important information and updates. I mainly specialize in Android-based mobile devices, leaving iOS and Apple devices in Mark's capable hands.
Previous iPhone 7 and 6S to have decreased battery life
Next Xperia Z5 revealed by Sony in 3 distinct variants