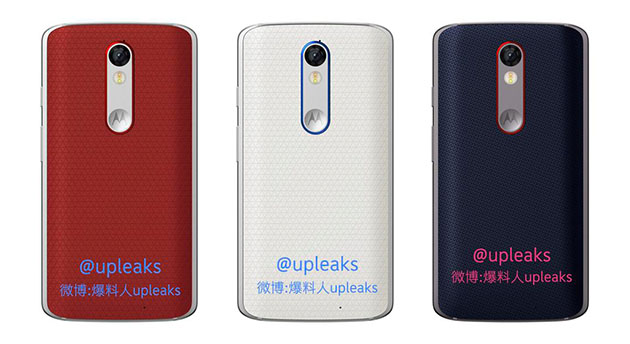 Remember how people are constantly talking about this year’s Motorola Moto X having two distinct variants? Well, scratch that, it’s not two, it’s three. Initial data showed that Motorola is releasing two versions of its popular flagship phone this year, in the form of the Moto X Style (a more expensive but top of the line version) and the Moto X Play (a slightly downgraded version of the Style, but with impressive battery life).

It turns out, there’s a third sibling in this 2015’s Moto X line-up, as known leakster @upleaks has just revealed. The third Moto X is called the X Force, and it’s designed for outdoorsy activities, sporting a more resilient and supposedly shatterproof chassis. This is reinforced by its codename, aptly called “Bounce”. Additionally, it also comes with some really nice specs, including a 5.43 inch QHD display, a 21 MP/5 MP camera combination, a Snapdragon 810 2 GHz CPU, 3 GB of DDR4, 32 or 64 GB of internal storage and, of course, microSD support.

So we’re getting a good looking, resistant phone with top of the line specs, Motorola’s well-liked “almost-core” Android, and possibly a reasonable price. As far as pricing is concerned, @upleaks hinted at $630 in China upon its December release, which would probably translate to $700ish, in theory, in the US.

Sounds good so far. It really does seem that Motorola has been paying close attention to user feedback after last year’s Moto X, a phone which was anything but bad, but was somewhat hindered by some flaws. This time around, there seems to be a version for everyone, with the Style, Play and Force all targeting different markets and audiences, but probably satisfying them equally. We’ll live and learn once we get our hands on all variants and thoroughly test them out.

As long-time IT enthusiasts, gamers and gadget fanatics, Mark and I have been working in the industry for a long time and we both have a vast experience in dealing with smartphones, tablets, PC and console hardware and everything tech-related. My list of industry insiders is long-enough to allow me to get insights into what's going on in the technology field and provide my readers with interesting and timely updates. I focus on brief, to-the-point reporting, keeping the "bla bla" to a minimum and making sure my readers get easy access to important information and updates. I mainly specialize in Android-based mobile devices, leaving iOS and Apple devices in Mark's capable hands.
Previous W5 Smartband giveaway
Next iPhone 6S reveal: all you need to know about Apple’s upcoming event