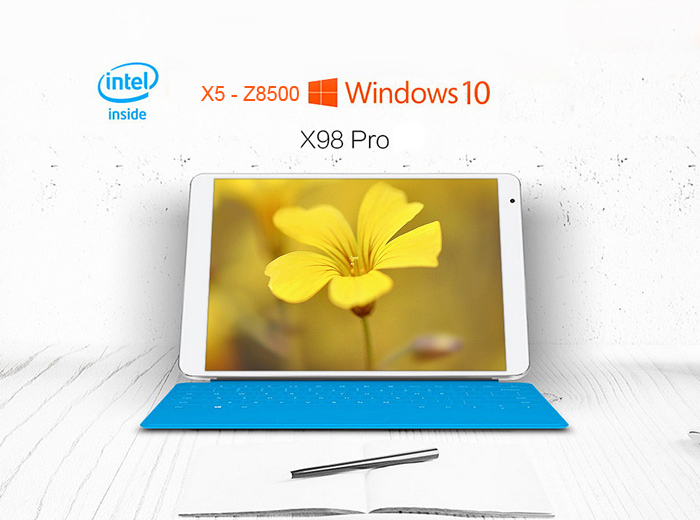 Although Windows 10 Mobile is nowhere to be seen, Windows 10 is ready to be used by everyone and Teclast is no exception. The Teclast X98 Pro might as well be the frist touchscreen device to come with Windows 10 out of the box, and it’s quite the affordable option. The Windows 10 equipped tablet price is only $242 on GearBest during the presale period, which lasts until today, so make sure to get your order in while there still are devices in stock.

The Teclast X98 Pro tablet comes with Windows 10 on board, which is the first major advantage of the Chinese device, but that’s not all that the device has to offer. Aiming to compete with even Apple products like the iPad Pro, the Teclast X98 Pro  does quite a good job at offering future-proof specs for an affordable price, and that’s quite admirable in an industry that’s hungry for profit.

Under the hood, the Teclast X98 Pro comes with an INtel X5 – Z8500 CPU clocked at 2.24 GHz, backed by 4 GB RAM and 64 GB internal storage, with a microSD card slot available for extra expansion. There’s a massive high-res 9.7-inch IPS screen up front with a 2048*1536 resolution that offers crisp and sharp viewing experience.

The Teclast X98 Pro  comes with a large 8000 mAh battery which promises an autonomy of about 7 hours, which is pretty good for a tablet. Bluetooth 4.0, OTG port, HDMI port, gravity sensor, Wi-Fi as well as a dual-camera system (5 MP on the back, 2 MP on the front) are in place to make the Teclast X98 Pro as convenient as possible.

Although Windows 10 is the most interesting part of the Teclast X98 Pro , the tablet has a lot to offer for a price that is difficult to beat. The metallic design of the tablet is just as neat, with a premium appearance to it, so there’s no failing with this one. Do you think Windows 10 is ready to be used on a touchscreen?

Tech Editor with lots of experience with PC hardware components, iOS and Windows-based mobile devices, and love keeping myself up-to-date with any developments in the industry, which I make my job in sharing with you, our readers.
Previous Get a smart watch for less than $30 in flash sale
Next No. 1 S3 smart watch available for only $59