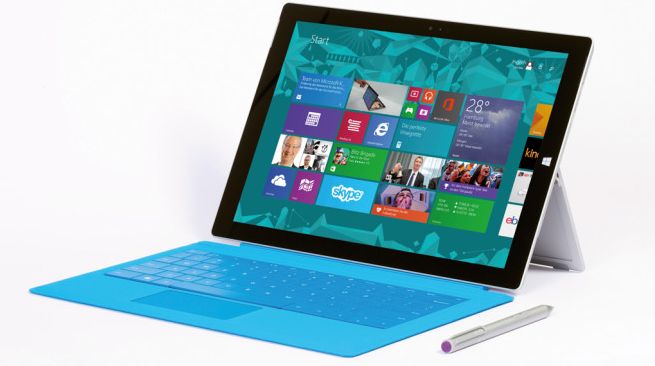 Surface Pro 3 is the name of the newest member of the Pro family, produced by Microsoft. This incredible piece of technology, having the looks of a tablet and the performance of a laptop. The first models of Microsoft’s Surface Pro 3 were released on June 20, 2014, after being announced on May 20, 2014.

As far as the design goes, Surface Pro 3 is a beautiful 2-in-1 tablet/ laplet, having a 12- inch screen which will delight every user’s eyes because it can actually display more content than the MacBook Air’s 13.3-inch panel, due to its 3:2 ratio. The design is completed with an elegant silver- colored shell which is made of magnesium alloy, being very cool and smooth to the touch. The thoughtful design of the Surface Pro 3 confers a premium feel to the users in every way. Although the performance of the Surface Pro 3 was enhanced, in comparison with the Surface Pro 2 it has become thinner and lighter, being incredibly comfortable to carry and to use.

In order to be able to successfully replace a laptop and fulfill every user’s needs, the Surface Pro 3 comes with the multi- position Kickstand and Surface Pro 3 Type Cover, going from tablet to laptop in an instance being easier than ever. Due to the magnetic innovative double hinge which was equipped with a strong magnet, the Type Cover will be steady, making it easy to type whilst having your device in your lap or on your desk.

Surface Pro 3 has a full- size USB 3.0, a micro SD card reader and a Mini Display Port, all these coming in very handy connecting peripherals.The device also comes with the improved Surface Pen which is meant to make users feel that they are using the stylus they’ve grown up with.

The Surface Pro 3 is equipped with an Intel i5 dual-core processor that can be boosted up to 2.9 Ghz, 8GB RAM, 256 GB SSD, two 5 MP webcams, Wi- Fi and Bluetooth connections and it weighs 1.76 pounds.

Although it seems to be the perfect mix of the laptop and tablet, being considered the direct rival of Apple’s devices, the longevity of the battery can be seen as a fault of the device, because the battery doesn’t last for more than 9 hours in a normal use. If you consider the fact that it was supposed to be a heavy-duty device, the low battery longevity will surely be seen as a problem.

Considering all these the Surface Pro 3 can be very useful when in need of a portable device for work and networking, being a lot easier to carry and a lot more powerful than an ordinary tablet.

I have always been eager to try out any gadget I could get my hands on. I became a tech journalist so that I could always be around technology and see the newest devices. I use gadgets every day to make my work and life easier. I have enough experience to know If a device is actually improving my activity, offers something useful or new. I will post my honest opinions and judge a device as objectively as I can.
@https://twitter.com/Colin27Anderson
Previous NextBit Robin: Snapdragon 808 phablet with roots in the cloud
Next Sony Xperia Z3 – should you upgrade from Xperia Z2?