Home / Smartphones / Samsung foldable smartphone – Could be released in 2016 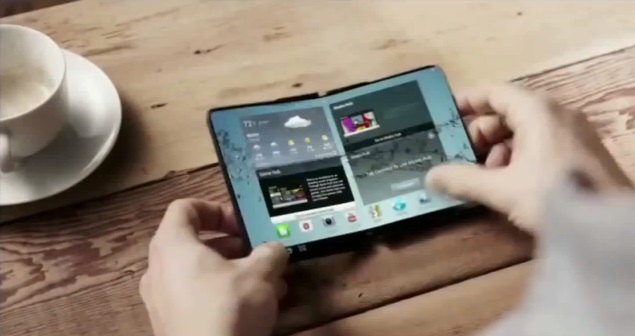 Samsung foldable smartphone – Could be released in 2016

Rumored to be released at the beginning of 2016. Multiple sources stated in the past few weeks that Samsung is working on a flexible smartphone which could be folded as a book. In order to do this, the new Samsung foldable smartphone will be made out of a thin layer of plastic instead of the common glass display smartphones nowadays feature.

Reliable sources leaked that the new device is currently being tested in two different configurations, one having a Snapdragon 620 processor and the other one featuring a speedier and more powerful 820 Snapdragon chipset.  The flexible Samsung smartphone is also rumored to have 3 GB RAM memory, microSD card slot and a non- removable battery.

Financial analysts whom the device was presented to reportedly said that the new device looked pretty good, making users who are tired of breaking their mobile phone’s displays eager to see what Samsung has prepared for them.

Since Samsung has been testing bendable OLED screens already in 2013, I think the rumors might just be accurate and the bendable phone which is currently known by the code name “Project Valley” will be released, unlike Microsoft’s Courier tablet. As anonymous sources stated, the device is being tested in China for the moment.

It is believed that Samsung will unveil the new flexible smartphone as soon as the end of 2015 and the new device will be purchasable in January, 2016.

Unfortunately Samsung didn’t address the rumors, so we still can’t know anything for sure. Nevertheless, we are anxious to see another level of the smartphones, now in devices which would have a big display but will also easily fit in pockets and small purses.

I have always been eager to try out any gadget I could get my hands on. I became a tech journalist so that I could always be around technology and see the newest devices. I use gadgets every day to make my work and life easier. I have enough experience to know If a device is actually improving my activity, offers something useful or new. I will post my honest opinions and judge a device as objectively as I can.
@https://twitter.com/Colin27Anderson
Previous One Plus 2 – A lot better and still afordable
Next OnePlus Mini surfaces with duo camera and biometric security