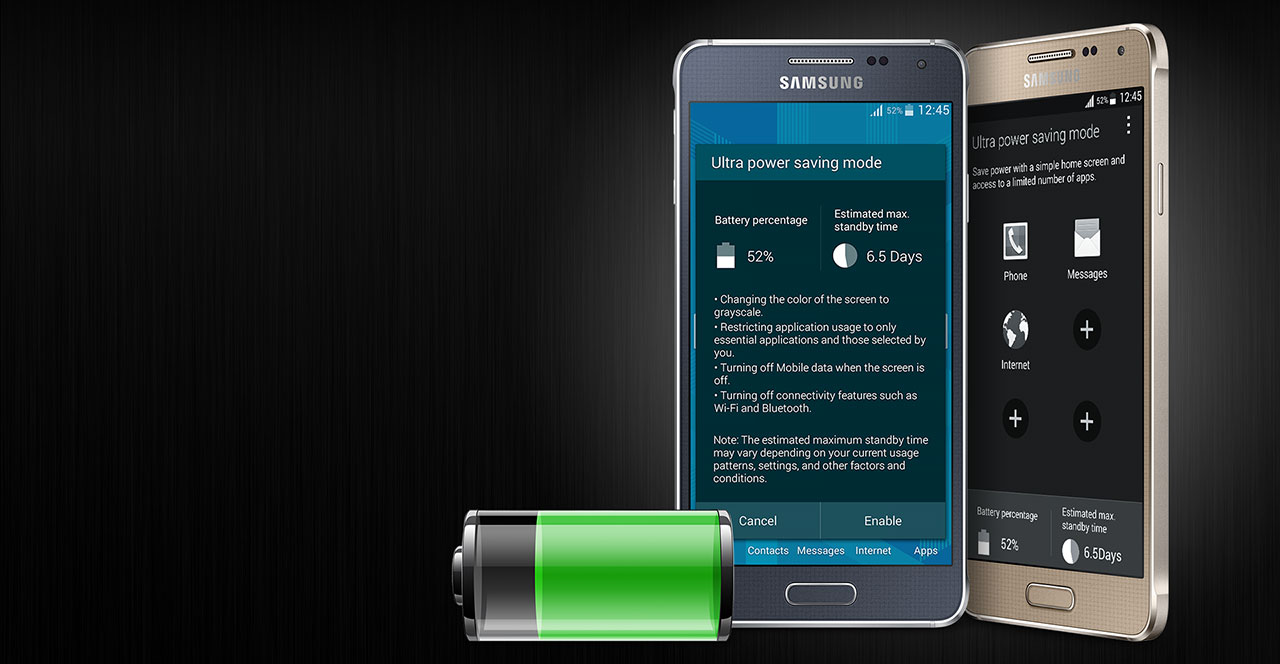 Samsung’s Galaxy Alpha model was released September, 2014 and is it still considered to be one of the most eye- catching model Samsung has delivered. The design of the Galaxy Alpha is sleek and stylish and the smartphone comes with a metal frame on the sides and a faux leather material on the back with an indented design. It is also equipped with numerous sensors and has impressive features but it has one major downsize: its battery. The Samsung Galaxy Alpha was created to be powerful but its 1860 mAh Li- Ion battery can’t ensure enough lifespan for users to be able to enjoy their smartphone.

After its release in September, 2014 Galaxy Alpha users quickly started to report poor battery and incredibly short lifespan compared to other devices in the same price range. Although the device’s 4.7- inch Super AMOLED display with a 720p resolution was supposed to help enhance the battery’s performance, it didn’t exactly work out. The Galaxy Alpha also features Ultra Power Saving, which which can prolong the battery’s lifespan but unfortunately when using the power saving mode users can’t access the majority of the apps the device features, making this feature useful only in extreme cases, not on a day- to- day basis. One good feature of the device’s small battery is that it charges relatively quickly for a smartphone, but this will certainly not make up for its lifespan.

Fortunately there’s still hope for Samsung Galaxy Alpha  users, given the fact that the smartphone has a removable battery, making it easy for users to replace it with more powerful ones. Fonejoy for example sells 2500 mAh Samsung Extended Battery kits for Alpha, which users report to considerably prolong the lifespan of the Galaxy Alpha. The Extended Battery kit can also be purchased on eBay or amazon at a reasonable price.Users will be required to make a compromise though, because the bigger battery is also thicker, which means that one of the most recognized features of the Samsung Galaxy Alpha, its thin design will have to suffer. On the other hand, a few mm in thickness is better than a poor battery lifespan.

All in all Samsung created a powerful device in the Galaxy Alpha but in order to use it at its maximum capacity it should’ve equipped it with a much better battery. Fortunately, although the original battery is not powerful enough for the features the Galaxy Alpha has to offer, there is always a solution to the problem, and in this case the solution consists in the official Samsung Extended Battery kit which can add numerous hours to every device.

I have always been eager to try out any gadget I could get my hands on. I became a tech journalist so that I could always be around technology and see the newest devices. I use gadgets every day to make my work and life easier. I have enough experience to know If a device is actually improving my activity, offers something useful or new. I will post my honest opinions and judge a device as objectively as I can.
@https://twitter.com/Colin27Anderson
Previous Didn’t the iPad Pro kill the iPad Air 3? Some say no.
Next Mlais Mx Base vs. Oukitel U8- a brief comparison