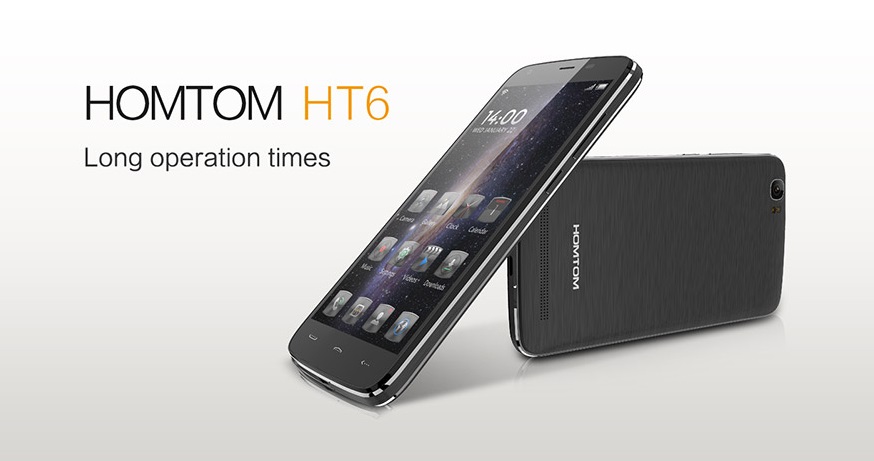 Doogee has launched a new device, the HomTom HT6, which is equipped with an amazingly large, 6.250 mAh battery. The HomTom HT6 is available on Comebuy.com for a staggering $139.62.

HomTom HT6 has a simple, slightly rounded design and it comes in two colors: black and silver. The HomTom HT6 is powered by a MTK6735 chipset with a 64bit, quad- core processor clocked at 1 GHz, includes 2 GB RAM and 16 GB internal storage. It also features a microSD card sot, so storage can be extended by up to 32 GB. The HomTom HT6 runs on Android 5.1 Lollipop, which might be upgraded later to Android Marshmallow. It sports a 5.5- inch, 720p capacitive touchscreen display which, as the manufacturer states, will be able to deliver a stunning visual experience.  The HomTom HT6’s display is protected by latest generation Gorilla Glass which ensures a higher durability of the device.

The Doogee HomTom HT6 is equipped with a 13 MP Sony back camera which should deliver great- quality photos and a 5 MP selfie camera posted on the front panel of the device. The device also offers multiple modes for easy customization effect, so captured images can be modified as users like. Among other features the HomTom HT6 has to offer we would like to highlight the Smart Wake Up Gestures, the  3 Fingers fast Screenshot and the HotKnot Wireless Transfer Technology which were created to offer a great user- experience. The HomTom HT6 also offers a high- quality encryption program in order to protect user’s privacy.

The Doogee 4G phablet is equipped with one standard SIM card slot as well as a micro SIM card slot, a micro USB slot and as previously mentioned, a microSD card slot. The HomTom HT6 offers WiFi, GSM, GPS, 4G and Bluetooth 4.0 connectivity and features gesture, gravity, ambient light and proximity sensors. One great characteristic of the HomTom HT6 is that it offers OTG protocol capability, which means that two- way data transmission can be achieved between different devices.

The most impressive feature of the HomTom HT6 consists in its super powerful, 6.250 mAh Lithium-ion Polymer non- removable Battery. The only way battery life could get better that this would be to have a removable battery, but let’s be honest, the 7 days average use. 72 hours talking time battery life should be satisfying enough for anyone.  Things only get better with the PumpExpress Fast Charging Technology the device offers. The Chinese manufacturer promises that thanks to the fast charging feature the device will charge 75% in only 30 minutes. Whether if that is true or not is still to be confirmed by users.

Although the battery of the HomTom HT6 is quite impressive, the device is still more than affordable, being available for only $139.62 on Comebuy. Given the great price and the high- quality features the HomTom HT6 has to offer, I think that there aren’t a lot of similar devices out there that could compete with Doogee’s new 4G phablet.

I have always been eager to try out any gadget I could get my hands on. I became a tech journalist so that I could always be around technology and see the newest devices. I use gadgets every day to make my work and life easier. I have enough experience to know If a device is actually improving my activity, offers something useful or new. I will post my honest opinions and judge a device as objectively as I can.
@https://twitter.com/Colin27Anderson
Previous Xperia M4 Aqua Probably Gets Android Marshmallow
Next LG G4 Pro, LG V10, both? What should we expect?