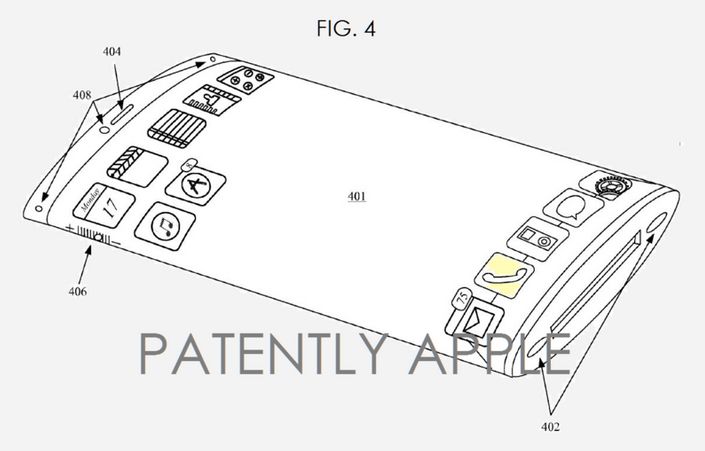 Apple fans are probably in the midst of unwrapping their new iPhone 6S or iPhone 6S Plus units, or maybe testing out the new Apple TV or music service. With all the excitement of the launch now dying down, rumors about yet another Apple-branded innovations are surfacing. Due to a recent patent that Apple was just awarded, the rumor mill is spinning and it’s going fast. The iPhone 7 will hold a significant plus in the face of the competition next year if Apple makes use of the patent that it was just awarded.

Apple filled a patent in 2013 fir a curved, flexible display, most likely thinking about incorporating in a future edition of the iPhone. Today, news emerged that the patent was awarded to the company and was published online, showcasing the concept designs of a new generation of iPhones. Next up is the iPhone 7, for which production should be beginning soon, so it’s entirely possible that Apple makes use of the technology now.

The iPhone 7 release date should come around in October 2016, so there’s a year for Apple to perfect development of the curved display in the patent. In the filing, the tech is described similarly to Samsung’s Edge technology, with curved edges on the display. The difference between Apple’s patent for the iPhone 7 and Samsung’s own is that Apple wants to make the edge display flexible as well.

As such, the iPhone 7 design will posibly include a flexible unibody and a curved display, which in turn raises the question: what’s with the battery? Most likely the tech will be similar to the LG G Flex 2 and the iPhone 7 might end up looking like a hybrid between the LG G Flex 2 and the Galaxy S6 Edge. The battery inside will not be flexible in this case, but it will most likely be restricted in size.

Nonetheless, there’s the option of Apple already working on a flexible battery which they could use in the iPhone 7’s unibody design. If that’s true, Apple might finally really innovate in the market. Samsung and LG have both contributed on the flexible battery front, but neither has developed a final model that would resist many recharge cycles and hold up autonomy at a resonable level. If Apple manages to get over these hurdles and launch an iPhone 7 with a flexible battery, the market might end up looking very different in the future.

Take this with a huge chunk of salt though, as patents awarded to companies do not guarantee that said companies will actually put them to good use. The iPhone 7 might end up being as rudimentary as the iPhone 6S with improvements made only under the hood, for all we know. But the patent offers up an interesting train of thought and we’re sure Apple is considering it themselves.

Tech Editor with lots of experience with PC hardware components, iOS and Windows-based mobile devices, and love keeping myself up-to-date with any developments in the industry, which I make my job in sharing with you, our readers.
Previous Pixel C, Nexus 5X, 6P and Chromecast 2.0 unveiled at Google event
Next iOS 9 security flaw