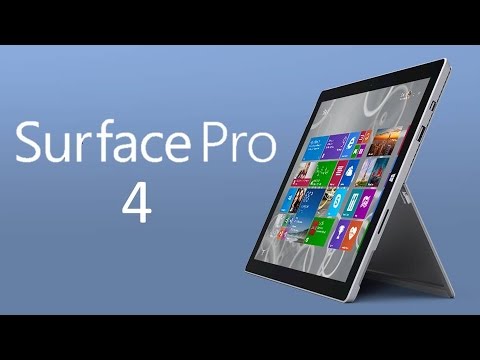 Microsoft’s 6 October event is fast approaching and tech enthusiasts get a little more excited every day about the devices that are said to be launched.  Microsoft is expected to launch several Windows 10 devices at their New York event at the beginning of next month. One of these devices is thought to be the new Surface Pro 4 tablet. Since we are accustomed to receive better and greater devices from Microsoft with every upgrade the new Surface Pro 4 should be a unique tablet in its category.

The Microsoft Surface Pro 4 might come in two versions: a 14- inch giant and a smaller, 12- inch laplet. As far as the design of the new device goes, it is rumored that the new Surface Pro 4 will also be made of magnesium- alloy, just as its predecessor, but it is projected to be a little thinner and lighter than the Surface 3, making it easier to carry around. Design- wise this seems to be the only change that the Surface Pro 4 comes with in comparison with the older model. The 14- inch version will probably be powered by the new Intel Core M and the smaller version will feature a Core i5 or Core i7. Both versions of the Surface Pro 4 are likely to feature the latest Intel Skylake chip due to which users will be able to have a great 3D gaming and video experience.

Considering the projected specs the Surface Pro 4 should be a premium device, so we are eager to see its exact specifications after its release date which will probably be in the first few days of October. Until then we can only guess, or presume based on previous experiences, what Microsoft prepared for its customers.

I have always been eager to try out any gadget I could get my hands on. I became a tech journalist so that I could always be around technology and see the newest devices. I use gadgets every day to make my work and life easier. I have enough experience to know If a device is actually improving my activity, offers something useful or new. I will post my honest opinions and judge a device as objectively as I can.
@https://twitter.com/Colin27Anderson
Previous K8 3G Smartwatch Phone on Discount
Next Model X- The First Electric SUV Created by Tesla