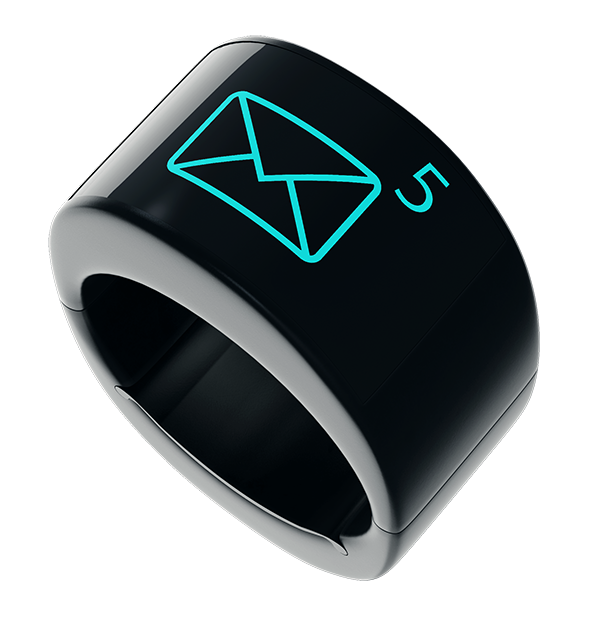 After watches, it seems now that rings are the new wearable accessories that are receiving more and more interest from the tech industry. It is not hard to imagine a small device around your finger, that can be synced to a smartphone. Similar to a smartwatch, the ring will show different types of notifications and could be used as a remote control for the phone. The challenge would be to create a device that looks stylish, is discreet and packs the features needed to make it useful.

Recently, Apple applied for a patent describing an interactive ring, a small device that works alongside another type of device, a smartphone or tablet. The SmartRing will be controlled via a touchscreen or touchpad and might include a microphone for voice control.  Apple says that they see a need for a more efficient way to use touchscreens. Mobile devices have grown large, are more difficult to carry or hold while performing other tasks. A small device such as a ring would be discreet, would not get in the way of day- to- day activities and only the user will sense when a notification appears.

MOTA DOI SmartRing is a project launched on the 29th of September 2014. It seems that just a year later, in September 2015 the manufacturer went into mass production with the SmartRing and it can be pre-ordered from MOTA’s official website. The SmartRing connects to a smartphone via Bluetooth and shows different types of notifications on the display , the possibility to read texts by swiping, and answering or rejecting calls.

The most important key feature of the MOTA SmartRing seems to be the way a user can choose what notifications the ring shows. This being a way to filter all the non-essential notifications that Facebook, Tweeter or different social media send. The SmartRing can be set to show only e-mails, calls or texts. There is also the the possibility to create a “VIP” list and the ring will only show notifications that come from that group.

One of the biggest challenges would be to make the SmartRing as light and as comfortable as possible while being strong enough not to break while performing routine activities. Waterproofing would be a welcomed feature. Hopefully we’ll see such a device in the near future.

I have always been eager to try out any gadget I could get my hands on. I became a tech journalist so that I could always be around technology and see the newest devices. I use gadgets every day to make my work and life easier. I have enough experience to know If a device is actually improving my activity, offers something useful or new. I will post my honest opinions and judge a device as objectively as I can.
@https://twitter.com/Colin27Anderson
Previous iPad Pro vs. iPad Air 2 specs comparison
Next Aeon GoPro Stabilizer created by Aetho