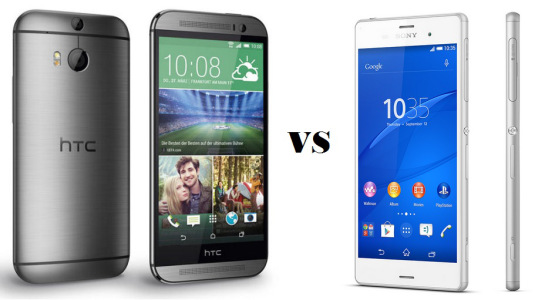 Smartphones nowadays have more and more features with every new version. Although having them is a great thing, they also drain our devices’ batteries. Specially when on the move, we need long battery life, don’t we? Two of the most successful models released last year were the HTC One M8 and the Sony Xperia Z3. By now, we could get a pretty accurate idea of their battery lives. We thought we could share our impressions with you, in case you can’t decide between the two devices.

The HTC One M8 is equipped with a  2600 mAh Lithium- Polymer battery, which is smaller than the Sony Xperia Z3’s 3100 mAh, Lithium- Ion battery. The HTC One M8 should be able to ensure 271 hours of stand- by time in 2G and up to 496 hours in 3G. The Sony Xperia Z3’s larger battery is supposed to offer 890 hours stand- by time in 2G and up to 740 hours in 3G mode. On the other hand, according to their specs, both devices offer the same talk time, which is up to 1 hours. It would seem that, unfortunately, the battery life of the higher- capacity Sony Xperia Z3’s battery doesn’t really offer more than the smaller battery of the HTC One M8. The good thing about them is that they both feature fast- charging, so at least that is an upside to them. Another great feature of both smartphones is that they come with battery saving software. Sony Xperia Z3 is even said to be able to last for up to two days on this mode.

HTC One M8 users reported a serious battery drain that shortened their battery life considerably. This seemed to become a problem right after updating to Android Lollipop, until then users say that their battery life was more than OK. Some found that a recalibration of their device helped to save energy, others opted for a factory reset in order to get their battery life back on the track. HTC One M8 users also reported that after updating their devices charging became a lot slower and sometimes the HTC One M8 couldn’t even get a 100% charge overnight. This can be a serious problem, making the HTC One M8’s battery life insufficient for daily use. Of course, users can extend their battery life by turning off wireless connections when they don’t use them, and also by setting their display brightness to a lower level. Apps can also use up a lot of your battery, so uninstalling apps you never use and updating existing apps could sometimes save a lot of battery.

On the other hand, the Sony Xperia Z3’s battery isn’t flawless either. Users reported that the device takes too long to charge. This problem can be caused by using a charger that wasn’t supplied with the device or due to deficiencies of the plug used. Sony Xperia Z3 users also complained that their batteries drain a lot quicker after updating to Android Lollipop, so this seems to be a common problem of the two devices. Unfortunately, unless you don’t want to downgrade to Android KitKat there isn’t much you can do about this. Wiping your cache partition and uninstalling apps you don’t use might help a little bit, but don’t expect miracles.

I have always been eager to try out any gadget I could get my hands on. I became a tech journalist so that I could always be around technology and see the newest devices. I use gadgets every day to make my work and life easier. I have enough experience to know If a device is actually improving my activity, offers something useful or new. I will post my honest opinions and judge a device as objectively as I can.
@https://twitter.com/Colin27Anderson
Previous Daimler’s Self- Driving Truck Tested
Next Microsoft’s October 6 event- What Should We Expect