Home / Gadgets / Microsoft’s October 6 event- What Should We Expect 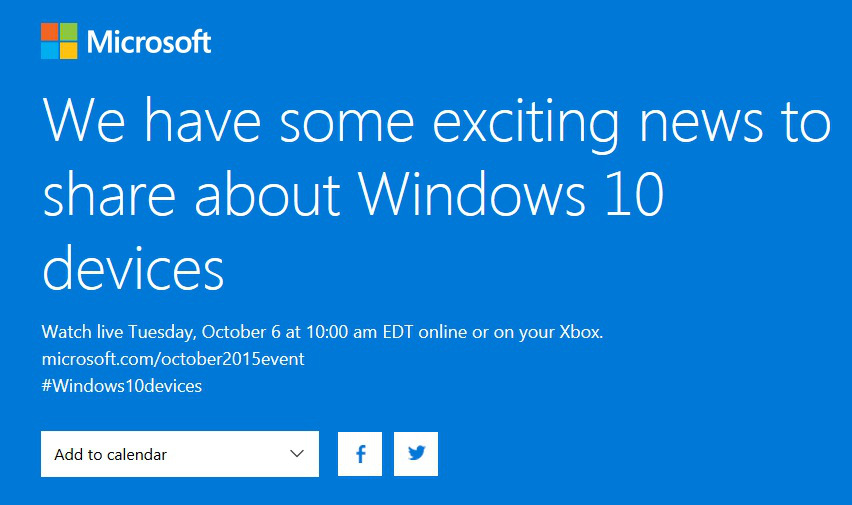 Microsoft’s October 6 event- What Should We Expect

Microsoft’s huge event is only a day away now. Although the media was paying a lot of attention to every single leak about what the event holds for us, there still might be some surprises. According to rumors, Microsoft will launch a number of new devices, most of them running on the new Windows 10 platform. It seems that we will see brand new devices alongside some updates. The new releases include flagship smartphones, tablets, possibly a laptop and a new Microsoft Band. Information was leaked ahead of time, so we have a pretty clear picture of what they will look like. We hope that the tech giant will also save a surprise or two for Microsoft’s October 6 event.

The most expected Windows 10 devices that are supposed to be released at Microsoft’s October 6 event seem to be the new Lumia smartphones. The Lumia 950 and Lumia 950XL will be running on the latest Windows 10 operating system, with the Continuum feature. It was said that the 5.2- inch Lumia 950 and the 5.7- inch Lumia 950 XL will be equipped with 20 MP cameras. Another great feature of these smartphones that are probably going to be released at Microsoft’s October 6 event is their storage. Their 32 GB internal storage is believed to be extendable up to 2 TB, which was never seen before in a smartphone. They are speculated to include 3 GB of RAM and feature a USB Type-C reversible port for charging and output. The flagship smartphones are thought to feature high- capacity batteries, so they should have a reasonable battery life. It was also hinted that alongside the Lumia 950 and 950 XL another, more affordable smartphone will also be released at Microsoft’s October 6 event, but there is no certainty there.

The Microsoft Band 2 was also announced to be released at Microsoft’s October 6 event. This gadget is more eye- catching than its predecessors and it’s supposed to offer a greater user experience. Whether it will comfortable or not, it still remains to be seen. Anyway, it is a welcome upgrade from the original Micrsoft band.

Another thing that tech- enthusiasts were hoping to see at Microsoft’s October 6 event was the moving of the Xbox One to Windows 10. Although Microsoft stated that they are bringing the new OS to the Xbox One, its most expected feature, the Cortana seems to be absent from this event. It is expected to be released for general public in the first quarter of 2016.

These are the new devices and features that we expect to see at Microsoft’s October 6 event. Whether they will all be released is still a mystery until tomorrow. Maybe Microsoft has also prepared other novelty for tech- enthusiasts. We can’t wait to see what they will be.

I have always been eager to try out any gadget I could get my hands on. I became a tech journalist so that I could always be around technology and see the newest devices. I use gadgets every day to make my work and life easier. I have enough experience to know If a device is actually improving my activity, offers something useful or new. I will post my honest opinions and judge a device as objectively as I can.
@https://twitter.com/Colin27Anderson
Previous HTC One M8 vs Sony Xperia Z3 – Battery Life
Next Apple MacBook Air for $1,194.00 on Amazon