Home / Smartphones / Samsung Galaxy S6 vs. Huawei Nexus 6P-Which One Is Better For You? 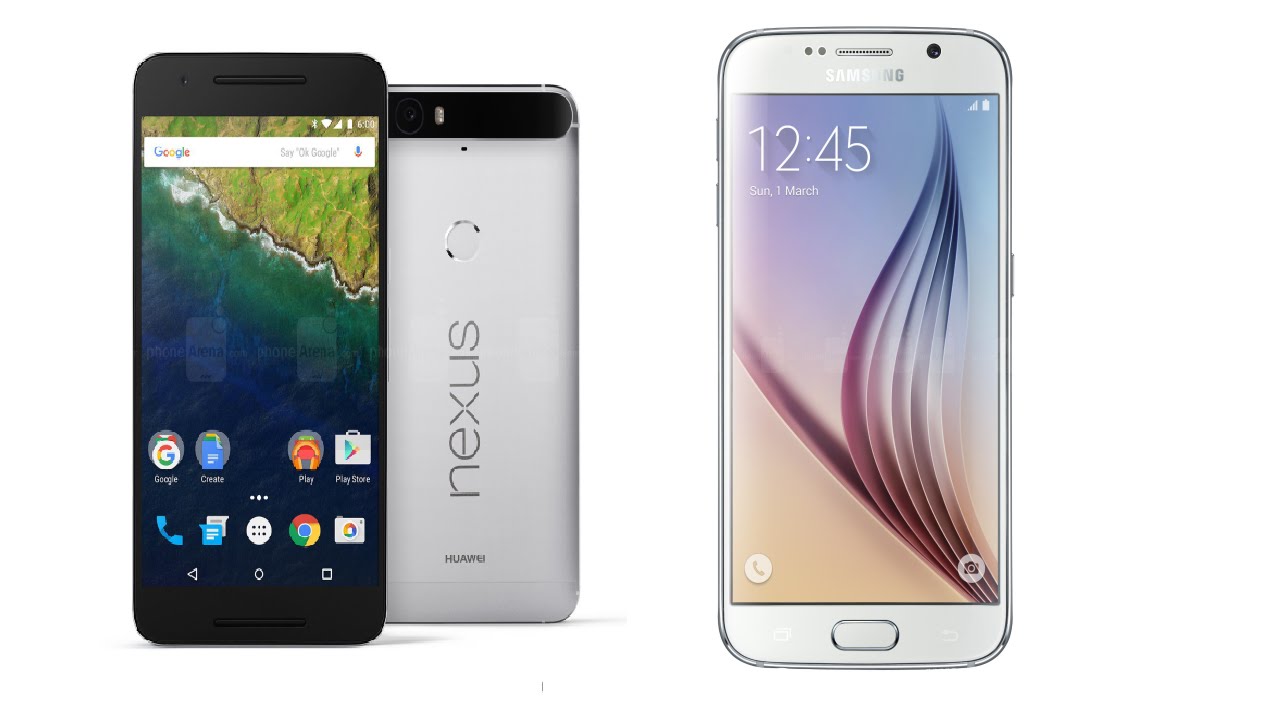 Samsung Galaxy S6 vs. Huawei Nexus 6P-Which One Is Better For You?

The Samsung Galaxy S6 was released in April this year and promised to be one of the best devices Samsung ever delivered. The Samsung Galaxy S6 has a matte- metal frame and feature Gorilla Glass 4 on the front and the back. This is a huge upgrade from the plastic construction of previous Galaxy models. It offers not only an appealing look, but also the premium feel that Samsung fans craved for. The body shape continues in the Galaxy style with rounded corners, so there is not much of a difference there. It has a metal- ringed home button on the front, which is situated between two capacitive buttons used for accessing recently used apps and features and for returning to the previous page. The fingerprint sensor is situated on the home button. Users will find a power button and a nano- SIM card slot on the right side o the frame and the volume buttons on the left side. On the bottom of the Samsung Galaxy S6 there is a micro USB charging port, alongside the audio jack. On the back panel of the Samsung Galaxy S6 there is a 16 MP camera, its LED flash and a heart- rate sensor, among other sensors.

The Samsung Galaxy S6 features a 5.1- inches, 1440x 2560 pixels resolution Super AMOLED capacitive multi touchscreen. It has a staggering 577 ppi pixel density, which is one of the best on the market. The sharp images could contribute to a higher- quality video experience, although not everyone’s vision is able to notice the difference. The Samsung Galaxy S6 has 16 MP back camera with optical image stabilization, face detection, auto HDR and an LED flash. This great camera allows users to take impressive photos. The front camera of the Samsung Galaxy S6 is a 5 MP one, perfect for selfie shots.  The Samsung Galaxy S6 offers dual- band Wi- Fi connection, Bluetooth connection and GPS. The Galaxy S6 has numerous extra features, such as different sensors, wireless charging and S- voice  natural language commands and dictation. The Samsung Galaxy S6 currently runs on Android 5.1.1 Lollipop but is said to get the Android 6.0 Marshmallow soon.

Although until this point the Samsung Galaxy S6 seems to be a great device it has a major downside. Its 2550 mAh non- removable battery. This is too small to ensure enough battery life to get through the day. Of course, there are multiple ways to save battery, specially by disabling apps and features, but then again, these apps and features are the reason why people purchase a high- end smartphone. Not being able to use them takes away a lot of a device’s worth.

The device is powered by a Samsung Exynos 7420, octa- core processor clocked at 1.5 GHz. It comes with 3 GB RAM and 32, 64 or 128 GB internal storage. Unfortunately, the storage can’t be extended, because the Samsung Galaxy S6 doesn’t have a microSD card slot. We understand that Samsung needed to cut some corners in order to create an extremely thin device, but maybe the storage space should’ve been left intact.

Google released it brand new Huawei- made Nexus 6P only a few days ago. It is one of the two devices to come with Android 6.0 Marshmallow out of the box. The Huawei Nexus 6P has a metal body with a black band at the top, containing the camera on the left side. The fingerprint scanner of the Nexus 6P is situated on the back of the device, just below the black band that hosts the primary camera and the LED flash. It has rounded corners, a subtle design and a premium feel. Although it is a fairly large device, the Huawei Nexus 6P is quite light- weight with its 178 grams (6.28 oz). The Nexus 6P comes with a 5.7- inches, Corning Gorilla Glass 4, oleophobic coating, 1440 p AMOLED capacitive touchscreen. It has a 518 ppi pixel density, which makes its display less sharp than other devices in its range, but it compensates with more vibrant colors.

The Huawei Nexus 6P is equipped with a 12 MP, primary camera with laser autofocus and dual-LED (dual tone) flash. Although this is not the best camera we’ve seen this year, it should be able to take reasonable quality photos. The Nexus 6P’s front camera is an 8 MP one. The Huawei Nexus P6 wireless connectivity is similar to the Samsung Galaxy S6’s 802.11 a/b/g/n/ac, dual-band, Wi-Fi Direct, DLNA, hotspot wireless connection. Naturally, it also ensures Bluetooth and GPS connectivity. Its features are also the ones we are used to having in smartphones nowadays, including different sensors and  active noise cancellation with dedicated mics. The Nexus 6P doesn’t feature wireless charging though. On the other hand, it does have a Type- C 1.0 reversible connector, so we can forgive the lack of wireless charging.

As we stated before, the Huawei Nexus 6P runs on Android 6.0 Marshmallow. It includes a non- removable, 3450 mAh, Lithium- Polymer battery, this being one of its greatest features. In order to ensure a reasonable battery life, a high- capacity battery was needed. We salute Huawei for delivering it. As for other features, the Huawei Nexus 6P is powered by an octa- core Qualcomm Snapdragon 810 processor clocked at 1.55 GHz. It includes 3 GB RAM and offers 32, 64 or 128 GB of internal storage. unfortunately, the Huawei Nexus 6P also lacks a microSD port, so there is no possibility to extend its storage. The reason to give up on this feature is probably the thin design of the device.

So, which one is better?

The answer to this really depends on what everyone thinks is more important. If you think that the camera of a smartphone is a decisive element for you, you will definitely rule for the Samsung Galaxy S6. If you are more interested in having a dependable smartphone with a decent battery life, the Huawei Nexus 6P is the one for you. I personally prefer the simpler design of the Samsung Galaxy S6, although I have to admit that the Huawei Nexus 6P is also an incredibly sophisticated device. Of course, the size might also be a reason to choose one device over the other one. If you prefer to have a large screen, the Nexus 6P will deliver exactly what you want. On the other hand, the Galaxy S6 is easier to carry around due to its smaller size. The Nexus has another advantage: being a Google device, Android Marshmallow will probably run smoother on it. If you can’t decide based on the technical specifications, maybe the price will settle the dispute. The Huawei Nexus 6P is almost $200 cheaper.

I have always been eager to try out any gadget I could get my hands on. I became a tech journalist so that I could always be around technology and see the newest devices. I use gadgets every day to make my work and life easier. I have enough experience to know If a device is actually improving my activity, offers something useful or new. I will post my honest opinions and judge a device as objectively as I can.
@https://twitter.com/Colin27Anderson
Previous Galaxy Note 4 Android update rolling out this week
Next Xperia Z4v Launch Canceled by Sony and Verizon