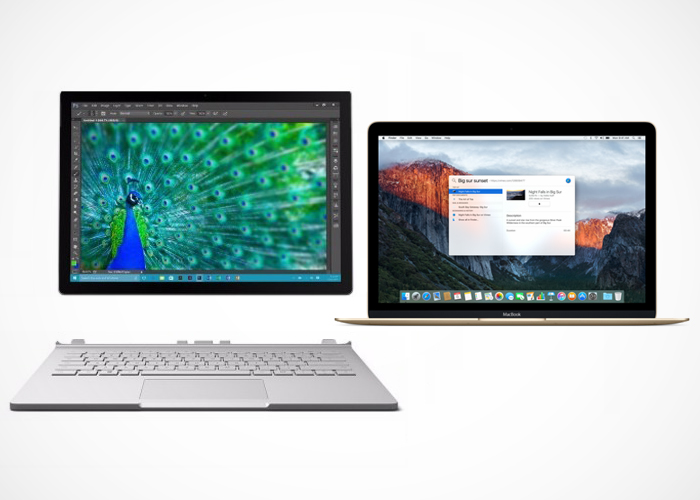 Apple released its MacBook Air back in March, and it was said to be one of the best devices of its kind at that time. This week, Microsoft unveiled its first laptop, the Surface Book. And it is said to be magnificent. These two are probably some of the most interesting laptops/ notebooks we’ve seen so far. The MacBook Air didn’t deliver everything customers expected, the Surface Book was a total surprise, so no one had any expectations. We decided to compare the two giants and see which one promises to be the flagship device of this year.

Apple’s 2015 MacBook Air has the same design as its predecessors. Although the all- aluminium case is still quite appealing after all these years, unfortunately,when it comes to its display it feels dated. The quite thick bezel that surrounds the display makes the MacBook Air a lot less eye- catching than other laptops that have the same price or are even cheaper. It’s not only the look of the display that is disappointing, it’s also its resolution. The MacBook Air still features a 1,440 x 900 pixel resolution, in times when the custom resolutions start at 1080 p and more and more device feature 4K resolution. Of course, the glossy LED-backlit display is not a horrible one, it still delivers a pretty good image quality, but we think that Apple could do better. Specially since it already equipped some of its devices with a high- quality Retina display. The keyboard and the trackpad also remained the same, but that is not necessarily a bad thing, given that users reported that the backlit keyboard of the Apple MacBook Air is great for long-form typing.

Although there are no visible changes in the MacBook Air design- wise, the 2015 model comes with a number of improved features. Firstly, it is powered by a 5th-generation Intel Core i5-5250U processor, which is better than the 4th generation processor of its predecessor. It also includes a new Intel HD Graphics 6000 GPU. It features dual display and video mirroring, which means that it simultaneously supports full native resolution on the built-in display and up to 3840 by 2160 pixels on an external display. The MacBook Air is now equipped with a new Thunderbolt 2 port, two USB 3.0 ports and an SD card slot, so connecting it to other devices is a lot easier than before.

What was and still is a great feature of the MacBook Air is its battery. The built‑in 54‑watt‑hour lithium‑polymer battery is able to last for up to 14 hours of web surfing, so it can be considered a pretty impressive one. Another aspect that makes the MacBook Air a great device is its 128GB or 256 GB PCIe-based flash storage, which makes the device work twice as fast as its predecessor. The 4 GB  or 8 GB onboard memory is also a decent feature, although other devices often offer more. The MacBook Air was originally released running on OS X Yosemite, but an upgrade to OS X El Capitan is also available now for the MacBook Air.

All in all we could say that there are no major changes in the MacBook Air compared with its predecessor. Although it might seem a little bit outdated, at least when it comes to the design and display, the MacBook Air is still considered by users to be one of the most universally useful laptops on the market. It is not made to impress by its design, it gets things done and is a great device to work on.

Microsoft’s Surface Book is one of the most eye- catching laptops on the market. Of course it is not just a laptop. Due to its clever hinge, named “dynamic fulcrum”, its screen is detachable and when attached on the other side, the keyboard actually becomes a prop. So you have a laptop and a tablet, depending on how you choose to use it. It has a Magnesium silver body, which is quite thin for the power it hosts under the hood. The display of the Surface Book is a 13.5- inch, PixelSense display with 3000 x 2000 pixels resolution and a 267 ppi pixel density. This is one of the best pixel densities laptops nowadays have to offer. Due to this feature, the images on the Surface Book will be sharp and clear. The screen of the Surface Book is covered in Corning Gorilla Glass, both for the great visual aspect and for durability. The integrated keyboard is back- lit, and Microsoft says it is perfect and will type almost silently. Some reported that in reality the keyboard feels a little bit sticky, but maybe it just needs a little bit of time to get used to it. The glass trackpad on the other hand is a great feature with a premium feel.

The Surface Book is the first laptop delivered by Microsoft and it certainly seems to be a high- end device. It offers multiple ways to use it, and there are also multiple configurations in which it can be purchased. It seems that it was created both to impress customers by its looks and to be extremely powerful and useful.

Which one is the ultimate giant of 2015?

We must admit that Microsoft’s brand new Surface Book seems to be great under every aspect. It has an innovative, sleek look, incredible display, great processor and storage alongside an incredible amount of RAM. Although it can be used as a laptop, it is also a tablet, so there are plenty of ways to make it work for you. It brings not only beauty but also a lot of power. Unfortunately for customers these all come with a price. A quite big one, actually. The Surface Book’s price starts at $1.499, and it can get up to $2,699, depending on the configuration the customer chooses. In the opposite corner, the MacBook Air has a $999 starting price, so it is a lot more affordable. And this will probably be an aspect that will determine customers to choose one or the other.  But the Apple MacBook Air has a dated design, a lower quality display, less RAM, and overall, less power. It also lacks the Surface Book’s touchscreen and the multiple ways to use it. It is a good, but plain laptop. If we set aside the price aspect, the Surface Book is definitely a winner, based on looks and specs. For those who only want a dependable laptop to work on and don’t require other features that the Surface Book has to offer, there is no need to invest in one. They can remain with their Apple MacBook Air, because it is still a great device to own. It just won’t offer the same feel the Surface Book will.

I have always been eager to try out any gadget I could get my hands on. I became a tech journalist so that I could always be around technology and see the newest devices. I use gadgets every day to make my work and life easier. I have enough experience to know If a device is actually improving my activity, offers something useful or new. I will post my honest opinions and judge a device as objectively as I can.
@https://twitter.com/Colin27Anderson
Previous Xiaomi Mi 4c Presell Price $289.85
Next Windows 10 Mobile Starts Rolling Out in December