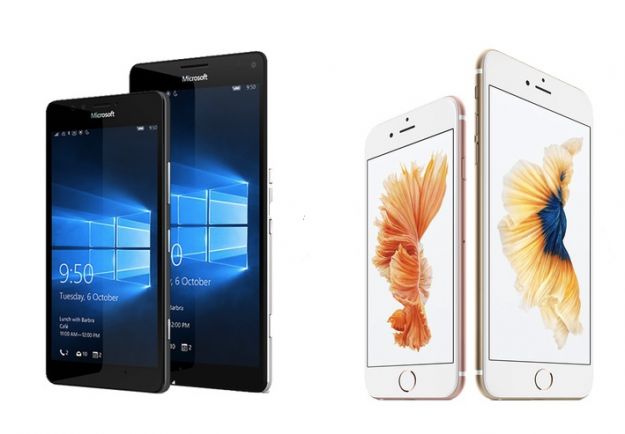 This year was full of new releases. Two of the smartphones that were recently launched are the Microsoft Lumia 950 XL and the Apple iPhone 6S. They were both long awaited and surrounded by a lot of chatter even before they were released. Now we know how they look and what they hide under their hoods. The iPhone 6S is already available in stores while we still have to wait a little longer until we can get a Lumia 950 XL. It seems that it will become available only next month. Until then customers can pre- order it. We decided to compare the camera, specs and features of these two devices, in order to see which one will prove to be better.

Microsoft’s Lumia 950 XL is the company’s latest phablet. It sports a 20 MP camera with triple LED flash and a fifth generation OIS. The triple LED flash is meant to create the illusion of natural light, so it should eliminate red eyes and lack of color in people’s skin tones. The PureView camera’s Zeiss optics enable users to take incredibly sharp and detailed photos. The camera itself  is great but so is the software behind it. Thanks to it, the Lumia 950 XL smartphone got intelligent enough to recognize the kind of picture users want to tae and make all the needed adjustments on its own. User’s don’t have to think about settings, but they will have great quality pictures. The camera of the Lumia 950 XL also offers fast focus, a high resolution zoom, along with optical image stabilization and continuous autofocus for video recording.The Lumia  950 XL definitely has one of the best if not the best cameras found on a smartphone at this time.  The secondary camera of the Lumia 950 XL is a 5 mp one with 1080p resolution. It doesn’t have a flash, so selfies won’t be extraordinary.

The Lumia 950 XL comes with some great features too. The most interesting one of the Lumia 950 XL’s features is the Continuum feature that allows users to turn their Lumia 950 XL smartphones into PCs and connect them to any kind of screens. Among other features, the Lumia 950 XL offers a number of sensors, wireless- and fast charging, active noise cancellation with dedicated mic, music and video player and video/ photo editor. All these make the Lumia 950 XL a pretty great device, but it’s not sure if they will be enough to compensate for the fact that the Windows 10 Lumia 950 XL won’t support a wide range of apps. This may be a turnoff for many users, who prefer Android and iOS- driven smartphones.

The iPhone 6S was released last month and is available in stores currently. It features a 12 MP back camera and a 5 MP selfie camera. The back camera of the iPhone 6S got a 50% better pixel rate than its predecessor. This will surely count when looking at picture clarity. The camera’s color accuracy and autofocus speed were also improved in the new iPhone 6S. But what is quite a new thing is that the iPhone 6S can record 4K video and 8 MP images simultaneously. The result is a clear, accurate video,which was said to be better than one taken with a Nikon DSLR device.The iPhone 6S also comes with a new and improved 5 MP secondary camera which is a big step forward considering the previous version’s 1.2 MP front- facing camera. Even more, Apple added a flash to the front of the iPhone 6S, so selfies will finally be more accurate and eye- catching. The iPhone 6S also mixed pictures with videos through its latest feature, Live Photos.  This captures 1.5 seconds of movement before and after a photo is taken to display short animations and sound when a 3D Touch gesture is used on an image. Unfortunately the new features, both Live Photos and 4K video come with a cost. They will use up your internal storage faster than ever.

The specs sheet of the iPhone 6S is unquestionably more interesting than that of its predecessor’s. It features a 4.4- inch, 750 x 1334 pixels resolution, LED backlit IPS LCD display protected by Ion-strengthened glass and oleophobic coating. The display of the iPhone 6S also got some improvements due to the 3D Touch feature and the Display Zoom. The iPhone 6S runs on iOS 9 out of the box but it is upgradeable to iOS 9.0.2 at the moment. It’s powered by an Apple A9 chipset, with Dual-core 1.84 GHz processor and has a PowerVR GT7600 (six-core graphics) GPU. As for the memory of the iPhone 6S, it includes 2 GB of RAM and up to 128 GB internal storage. The starter level device only includes 16 GB internal storage which is not expandable. The wireless connection of the iPhone 6S is the same as the one found in the Lumia 950 XL. The only difference there is that the Apple iPhone 6S now has Bluetooth v. 4.2 compared to the v. 4.1 found on the Lumia device. The iPhone 6S also has a v.2.0 reversible connector included. The iPhone 6S only boasts a Li-Po 1715 mAh battery, which is a little disappointing.

As far as the features go, the sensors included in the iPHone 6S are similar to those in the Lumia 950 XL. It also offers active noise cancellation possibility and of course, it bring Siri to its users. Other features include the Live Photos, the 3D Touch pressure-sensitive display and the whole new load of apps the iOS 9.0.2 now delivers. All these can turn the iPhone 6S into a great device that will be fun to use. Then again, the changes, compared to the iPhone 6 are not as great, so we can see no reason why iPhone 6 owners should upgrade to iPhone 6S.

We can say that both Apple and Microsoft delivered some pretty amazing devices this year. Both the Lumia 950 XL and the iPhone 6S have some great features they lacked before. The Windows 10 device Microsoft delivered is more powerful than ever, equipped with a great camera and a list of great specs. But when it comes to extra features, it doesn’t look that well anymore. Unfortunately,the Windows 10 Mobile OS just can’t ensure the same number and quality of apps that iOS and Android do, and this might be a reason for the Lumia 950 XL not to be such a great success after all. The Lumia 950 XL really is a great smartphone, but we are not sure whether customers will trade Android or iOS in just for the sheet of specs, no matter how impressive it is. On the other hand, the Apple iPhone 6S didn’t really impress with anything either, maybe except its new camera which is said to perform better than a Nikon DSLR. The Live Photos and 3d Touch features are also quite fun but they are not enough for iPhone users to give up on their iPhone 6 device and spend a lot of money in order to get the new iPhone 6S. It seems that Microsoft and Apple just delivered two great devices but they just aren’t as impressive as they should be in order for customers to fight for them. If we were to choose between the two, we would probably go for the Lumia 950 XL, mainly because of the bigger display, its higher resolution and the higher- capacity battery, alongside the larger storage space.

I have always been eager to try out any gadget I could get my hands on. I became a tech journalist so that I could always be around technology and see the newest devices. I use gadgets every day to make my work and life easier. I have enough experience to know If a device is actually improving my activity, offers something useful or new. I will post my honest opinions and judge a device as objectively as I can.
@https://twitter.com/Colin27Anderson
Previous iPhone 6S vs. Oppo Find 7 Camera Comparison
Next OnePlus 2 vs Samsung Galaxy S6: Best flagship in 2015