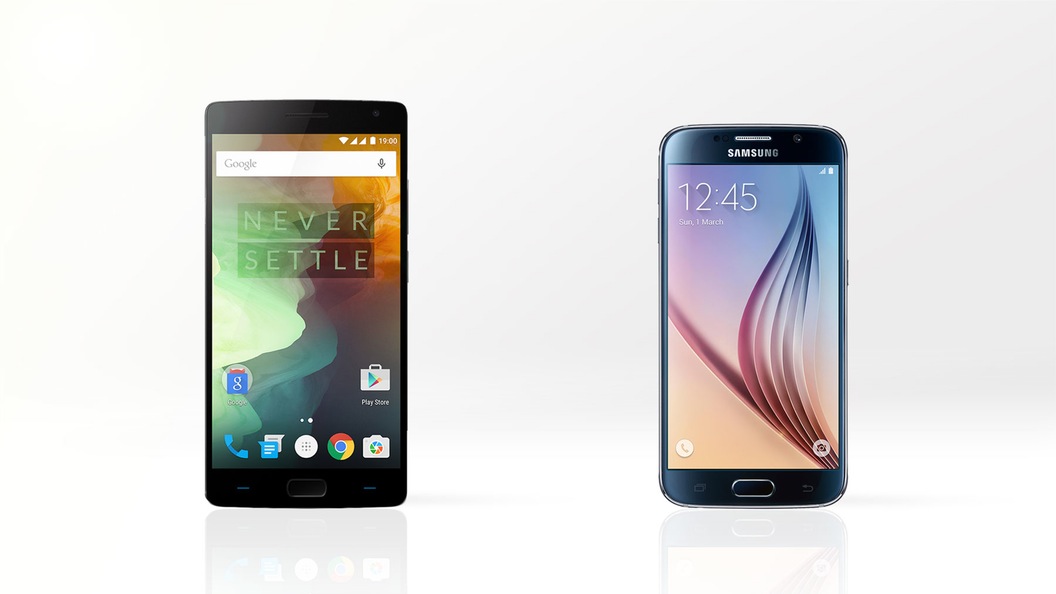 The OnePlus 2 and the Samsung Galaxy S6 are probably the most disputed smartphones released this year. They are both great devices, flagship devices of their manufacturers and they both compete for the same title. The flagship device of 2015. Their price isn’t exactly the same, so that might be the decisive aspect of whether one or the other will get the title. Apart from that, we decided to present their specs and compare the OnePlus 2 and the Samsung Galaxy S6.

The OnePlus 2 was released this summer, only a few months behind the Samsung Galaxy S6. The OnePlus 2 has a simple design, with rounded edges and a physical button under the screen. It also features two capacitive buttons on each side of the home button. The OnePlus 2 is not exactly a small device, given its 15.18 cm height, 7.49 cm width and 0.99 cm thickness. It weighs 175 g, so the OnePlus 2 is not extremely light either. Users will find a 5.5- inches, 1080p display on the OnePlus 2, with Oxygen 2.1 UI. The LTPS LCD display of the OnePlus 2 is protected by Corning Gorilla Glass 4, both for aspect and durability. It has a 401 ppi pixel density which is decent, but it could also be better.

The camera system of the OnePlus 2 consists in a 13 MP back camera and a 5 MP secondary camera. The back camera offers optical image stabilization, laser autofocus and dual- LED flash. It also features Geo-tagging, touch focus, face detection, panorama mode and HDR.  As far as the video feature goes, the OnePlus 2 is able to record 2160p, 30fps and 720p, 120fps videos. The selfie camera is a 5 MP one with 1080p, without a flash, but still able to deliver decent images.

The OnePlus 2 offers a 11ac Wi-Fi and Bluetooth 4.1 connectivity- wise. It also features a Type- C reversible connector. The OnePlus 2 also offers some extra features, including an accelerometer, a gyro sensor, proximity sensor and a compass. One great feature of the OnePlus 2 consists in its battery. The OnePlus 2 is equipped with a non- removable 3300 mAh battery which should ensure a quite good battery life. It will definitely take your through the day on one charge.

All these features, plus its rather low price, starting at $329 (£239) for the 16GB version, make the OnePlus 2 a serious contestant for the Best Flagship in 2015 title.

Samsung’s flagship device is definitely the S6 this year. It was released in April and although other great devices were also released this year, after the Samsung Galaxy S6, it is still in the charts. This is probably due to the slim design of the Galaxy S6. Measuring 143.4 x 70.5 x 6.8 mm (5.65 x 2.78 x 0.27 in) and weighing only 138 g, it is one of the thinnest smartphones out there. The Samsung Galaxy S6 is extremely eye- catching with its rounded edges. The Metal and glass body also attracts attention, giving the Galaxy S6 both a premium look and feel. The display of the Samsung Galaxy S6 is a 5.1- inch Super AMOLED capacitive touchscreen with TouchWiz UI and protected by Corning Gorilla Glass 4. With 1440 x 2560 pixels resolution, the Galaxy S6 has a 577 ppi pixel density, which is one of the greatest pixel densities available at this time. Due to this feature, the Galaxy S6 offers a clear , beautiful image.

The back camera of the Samsung Galaxy S6 is one of the best available on the market now. The 16 MP camera is a lot more accurate than the One Plus Two’s 13 MP one. It also has optical image stabilization, autofocus and LED flash. Alongside the Geo-tagging, touch focus, face detection and panorama features, also offered by the One Plus Two, the Galaxy S6 also has the Auto HDR mode for video. It supports 2160p@30fps, 1080p@60fps, 720p@120fps, HDR, dual-video recording. The secondary camera of the Galaxy S6 is also better then the one the OnePlus 2 is equipped with. Although it’s also a 5 MP one, it also offers dual video call, Auto HDR and support higher quality video at 1440p@30fps.

The wireless connection offered by the Galaxy S6 is similar to that featured by the OnePlus 2. In addition Samsung also offers NFC, a IR blaster, a heart rate monitor and faster 4G (Cat 6 300Mbps against Cat 4 150Mbps). Unlike the OnePlus 2, the Galaxy doesn’t have a Type- C reversible connector, instead it offers microUSB v2.0 and USB Host. The Galaxy S6 also features wireless charging, S-Voice natural language commands and dictation, smart stay and OneDrive. The battery of the Samsung Galaxy S6 is lower- capacity than the OnePlus 2’s, it’s only a non-removable Li-Ion 2550 mAh battery. Samsung probably had to compromise in order to keep the slim figure of the Galaxy S6, and looking at it we think they weren’t wrong to take this decision.

I have always been eager to try out any gadget I could get my hands on. I became a tech journalist so that I could always be around technology and see the newest devices. I use gadgets every day to make my work and life easier. I have enough experience to know If a device is actually improving my activity, offers something useful or new. I will post my honest opinions and judge a device as objectively as I can.
@https://twitter.com/Colin27Anderson
Previous Lumia 950 XL vs iPhone 6S: Camera, specs and features
Next Apple Pay at every Starbucks and KFC soon