HTC One A9 Pictures Leaked

Everyone thought that the new HTC One A9 would be launched at HTC’s September 29 event. Instead, HTC announced its HTC M9+ Supreme Camera with that occasion and announced another event, due October 20. Now, we hope that the HTC One A9 will be revealed at the October 20 event. There were rumors circulating about the HTC One A9 in the fall, and now they become more and more clear. In fact, images of the new device were leaked this week, so now we know for certain what it will look like. 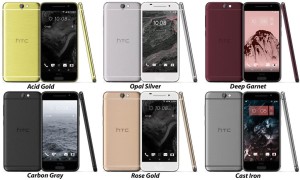 The device pictured in the leaked images seems quite familiar. That is because if they are accurate, and they reflect the way the HTC One A9 will look like, it will resemble the iPhone 6. A lot. It features the same rounded edges, the plastic antenna channels embedded in the metal body. Although HTC was the first to use the plastic insertions, it is widely connected to the iPhone image nowadays. The available colors for the HTC One A9 were also leaked and it seems that customers will be able to choose from a multitude of different colors. Back to the design of the HTC One A9, the leaked images also show that the speakers of the HTC One A9 are now positioned on the bottom edge of the device, which might mean that the sound of the HTC One A9 will not be as high quality as that of previous models.

As far as other specs go, the HTC One A9 is expected to be powered by an octa- core Qualcomm MSM8952 Snapdragon 617 chipset, include 3GB of RAM and 32GB of storage. It was also said that the HTC One A9 will be equipped with 1.96GHz deca-core MediaTek Helio X20 SoC and 4GB of RAM. Other leaks indicate 2 GB of RAM and 16 GB of storage, so there is no certainty there either thus far. What seems to be common in rumors is that the majority of people believe that the HTC One A9 will feature a 13 MP back camera and a 5 MP selfie camera. Regarding the battery of the new HTC device, it was said that it will have a non-removable Li-Ion 2150 mAh battery which, let’s be honest isn’t quite impressive.

One thing we know is that there is still no certainty regarding the specs sheet of the HTC One A9. We hope that some light will be shed over them in the near future. In worst case scenario we will find out what lays under the hood of the HTC One A9 after the 20 October virtual event of HTC. Until then we can only guess.

I have always been eager to try out any gadget I could get my hands on. I became a tech journalist so that I could always be around technology and see the newest devices. I use gadgets every day to make my work and life easier. I have enough experience to know If a device is actually improving my activity, offers something useful or new. I will post my honest opinions and judge a device as objectively as I can.
@https://twitter.com/Colin27Anderson
Previous Overcast 2.0 Is Free
Next Xiaomi Mi5 specs and features leaked, release coming soon