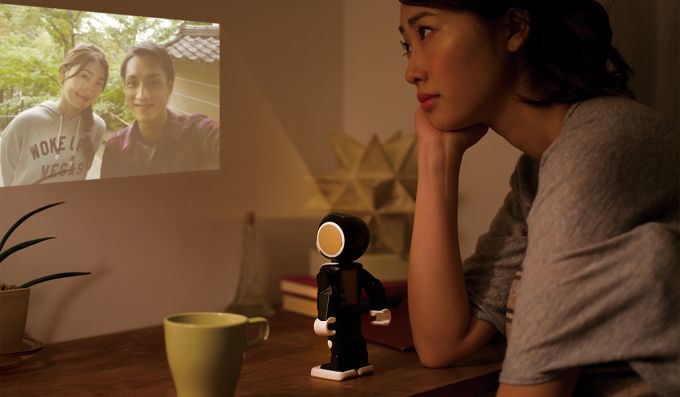 At this year’s CEATEC exhibition in Japan, multinational electronics corporation Sharp revealed the prototype for a new smartphone in the shape of a robot called RoboHon. If you’re not familiar with CEATEC, it is Japan’s largest IT and electronics trade show where developers from all over the world can present their new technologies.

RoboHon (the word comes from the combination of robot and phone) will probably be the world’s first robot smartphone. According to Sharp, RoboHon will have numerous features exclusive to it as well as some universal features. The developer wanted to make clear the fact that RoboHon is intended to be practical but fun.

The robot is pretty small, during the demonstration it was placed inside the top pocket of a jacket where it could listen to commands. In the Sharp demo video it was worn around the neck. On its back it has a small LED screen that displays any relevant information.

Like most smartphones RoboHon will allow you to receive and perform calls, text messages and emails. Unlike most smartphones however, RoboHon can actually speak and tell you who is calling and what the message you received says. RoboHon can also understand voice commands so you can interact with it simply by speaking. Being a robot it can also walk around, sit down and get up, and according to Sharp even dance.

Another feature RoboHon boats is the projection feature. It can project photos or videos captured by you on any surface. It also functions as a camera, it can stand anywhere and take pictures for you. According to the developer it has both voice and face recognition so it can distinguish between users.

The device is only a proof of concept and is in no way ready for mainstream use. Sharp announced that the official version will be released sometime during 2016. Sharp also promised to give more details about the functionality of RoboHon as the release date gets closer.

I'm very curious when it comes to technology. I enjoy tinkering with entertainment and communication gadgets.
Previous Apple Pay at every Starbucks and KFC soon
Next LogMeIn buys LastPass for $110 million