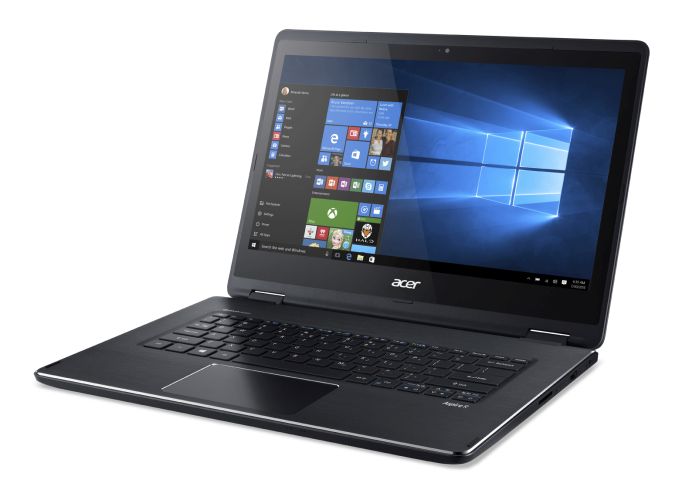 Acer announced  2 new Windows 10 devices at a event in Taipei, together with Microsoft. The Aspire R14 convertible notebook and the Acer Aspire Z3-700 all-in-one PC. The latest version of the Aspire R14 comes with a few improvements. The dual torgue hinges are thinner, so switching between laptop and tablet mode is faster and easier. The exterior looks elegant, the metallic finish and the diamond cut edges give the Aspire R14 a premium look. It features a 14 inch full HD display, and being a device created to run on Windows 10, the display has 10 point multi touch support for Microsoft’s latest OS. The new Aspire R14 will be thinner and lighter than the version launched earlier this year. It will be 0.73 inch thick and will weigh just under 2 kg.

Acer brought improvements to the Aspire R14 under the hood as well. You can choose between one of Intel’s 6-th generation processors. The first is an i5-6200U, dual-core clocked at 2.3 GHz. The second is an i7-6500U clocked at 2.5 GHz, with the possibility to overclock it to 3.1 GHz. The graphics processor is the Intel HD 520.  The device will support up to 8 GB of DDR3l RAM. HDD is not available for the new Aspire R14, but it does support up to 512 GB SSD storage. Acer says that the Aspire R14 will have a battery strong enough to power it for 9 hours straight.

The refreshed Aspire R14 will be launched in late October in the US and will have a price tag of approximately 700$.

Alongside the refreshed Aspire R14, Acer also revealed the Acer Aspire Z3 – All in One PC and a smartphone. The Acer Liquid Jade Primo is the upcoming Windows 10 flagship and will be probably revealed during the holiday season. The prototype shown by Acer is similar in characteristics to the Nokia Lumnia 950. A 5.5 inch Super Amoled display, 21 MP rear camera and has the Soc Snapdragon 808. The  The starting price for the Acer Aspire Z3 will start from €599.

I have always been eager to try out any gadget I could get my hands on. I became a tech journalist so that I could always be around technology and see the newest devices. I use gadgets every day to make my work and life easier. I have enough experience to know If a device is actually improving my activity, offers something useful or new. I will post my honest opinions and judge a device as objectively as I can.
@https://twitter.com/Colin27Anderson
Previous BlackBerry might focus solely on software in the future
Next Apple blocks News app in China