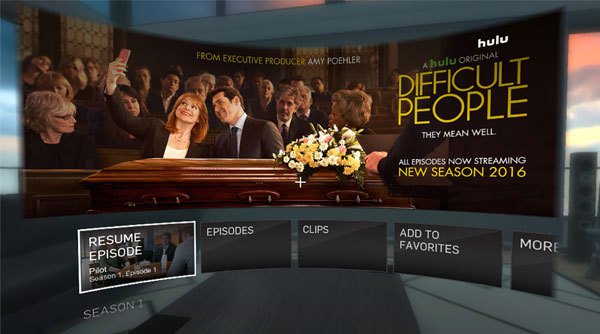 Hulu is one of the best known streaming video company. They plan to launch their first virtual reality app and what better time could there be then next month? This way, the virtual reality app will hit the stores exactly in the same time with Samsung’s brand new Gear VR headset. According to Hulu, the VR application  will feature immersive 3D environments. These will allow users to stream VR short films, alongside other, 2D content in Hulu’s library. The first VR short film subscribers could watch is  RocketJump: The Show, produced by Lionsgate and RocketJump.

Users will be able to log into the Hulu VR app through their virtual reality devices. The environments offered by Hulu to create a special user experience include comfortable living room settings and movie theater settings. Users will be able to enjoy the newest episodes of their favorite TV shows in these special 3D settings. For those who are Seinfeld fans, Hulu even offers the possibility to transport themselves onto the protagonist’s famous blue couch. Besides the movies and TV series that were already streamed by Hulu, subscribers will also be able to opt for original series that are purely virtual reality. These are not available at the time, but Hulu is considering to commission a number of such series. Alongside TV series, Hulu also promises to create several cinematic VR movies. It seems that the first one of these productions will be “The Big One,” produced by Lionsgate in collaboration with RocketJump and VR innovator WEVR.

Although no specific date of release was announced, it seems that the Hulu VR app will become available before the end of November. This way, people who will purchase the Gear VR, that is also coming before Black Friday, will be able to enjoy the Hulu experience on their new VR headset.

I have always been eager to try out any gadget I could get my hands on. I became a tech journalist so that I could always be around technology and see the newest devices. I use gadgets every day to make my work and life easier. I have enough experience to know If a device is actually improving my activity, offers something useful or new. I will post my honest opinions and judge a device as objectively as I can.
@https://twitter.com/Colin27Anderson
Previous New OnePlus Device Shown by FCC
Next Google Glass and HoloLens to be competing products next year