Based on filings that were revealed by the FCC, it seems that OnePlus is working on another smartphone. The new OnePlus smartphone, named E1005, may be announced at the October 12 media event of OnePlus in India. The new device doesn’t seem to continue in the OnePlus One and OnePlus 2’s design scheme. FCC filings reveal a smartphone with rounded edges and a back camera situated in the top left corner of the back panel. The plastic material and metal frame seem to be present in the new OnePlus device also. It features a micro USB port on the lower edge of the device, between what seem to be two stereo speakers. 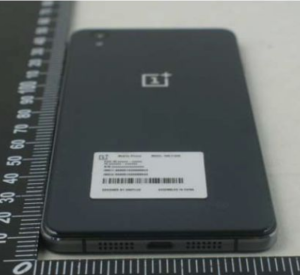 According to the filings spotted on FCC it seems that the new device manufactured by the Chinese startup company will be approximately the same size as the OnePlus 2. The display of the new smartphone is a 5.5- inch one.  The same filings reveal that the new OnePlus device will support LTE, Bluetooth, GPS and Wi- Fi connectivity. It is also mentioned that the new smartphone model will support FM radio. Based on the FCC filings we can say that the new OnePlus will be powered by a 1.9 GHz processor, but there are no hints regarding the chipset manufacturer or model.

The new OnePlus smartphone, currently known as model E1005 will most likely run on modified Android Oxygen OS, just like its predecessors. Since no other specs were spotted and there was no official announcement regarding a new OnePlus smartphone, we don’t know a lot about the new device. The black handset shown by FCC seems to be a nice looking device, but we hope that the design will also be completed by a great specs sheet. Maybe we will get further information after the media event of  OnePlus in India today. The minute we find out more we will come with an update.

I have always been eager to try out any gadget I could get my hands on. I became a tech journalist so that I could always be around technology and see the newest devices. I use gadgets every day to make my work and life easier. I have enough experience to know If a device is actually improving my activity, offers something useful or new. I will post my honest opinions and judge a device as objectively as I can.
@https://twitter.com/Colin27Anderson
Previous Top 5 drone models in 2015
Next Hulu’s VR App To Become Available Next Month