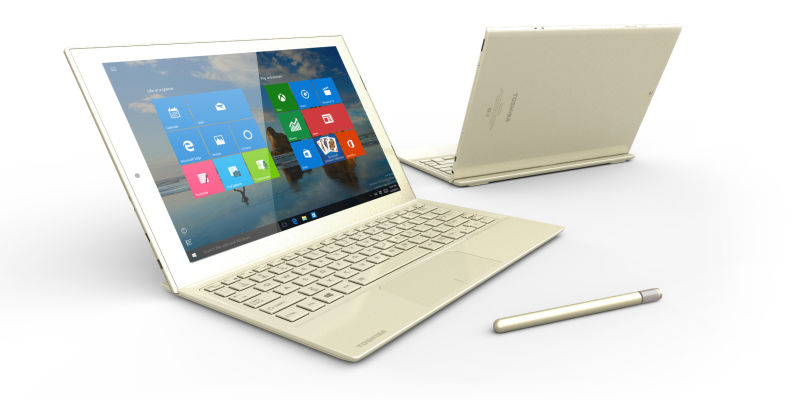 Toshiba reinvented its original DynaPad, which was released over two decades ago. The new DynaPad is a Windows 10 device, and was officially announced on Tuesday. Toshiba’s new 2-in 1 device was first hinted at the IFA 2015, where a prototype was shown. Although design- wise the new DynaPad looks a lot like Microsoft’s Surface device, Toshiba promises that the new DynaPad is a unique laplet. We must admit that the incredibly thin DynaPad is eye- catching and it also seems easy to use.

The new DynaPad features a 12- inch,  1920 x 1280 pixels resolution display. The screen is not only covered with an anti- reflection coating, it is also anti- fingerprint. This way the touchscreen won’t get smudged in record time and the image will remain visible and clear for a longer period. The key feature of the touchscreen is not its anti- fingerprint characteristic though. Using the display ll become a lot more easy and fun due to the Wacom Active Electrostatics TruPen that comes with the new DynaPad. What is special about this feature is that, according to Toshiba, it’s able to create the same feeling users have when writing on actual paper with an actual pen. The TruPen offers 2048 levels of pressure and was created to work with Microsoft’s Office and Edge, as well as Toshiba’s own suite of business apps.

Under the hood, the new DynaPad packs a 1.44 GHz Atom processor, alongside 4GB of RAM. There is still no clear information regarding its internal storage, but it probably won’t be the key feature of the new DynaPad. Although the memory of the new DynaPad is not exactly impressive, its size is. Given the fact that the tablet only weighs 569 g and si only 6.6 mm thick, this might be one of the thinnest devices we’ve seen so far. Even when the keyboard is connected, the new DynaPad only measures 14.9 mm and weighs just 996 grams. These features make the new DynaPad extremely easy to carry around. Although we already think that Toshiba’s new DynaPad is a great device, we are eager to see its complete spec sheet and its price tag. The new DynaPad is available for pre- order in Japan starting today, but it will only be released in the US and Europe at the beginning of 2016.

I have always been eager to try out any gadget I could get my hands on. I became a tech journalist so that I could always be around technology and see the newest devices. I use gadgets every day to make my work and life easier. I have enough experience to know If a device is actually improving my activity, offers something useful or new. I will post my honest opinions and judge a device as objectively as I can.
@https://twitter.com/Colin27Anderson
Previous Pepsi to Launch Smartphone in China
Next Galaxy Grand On Spotted on Tenaa Certification Site