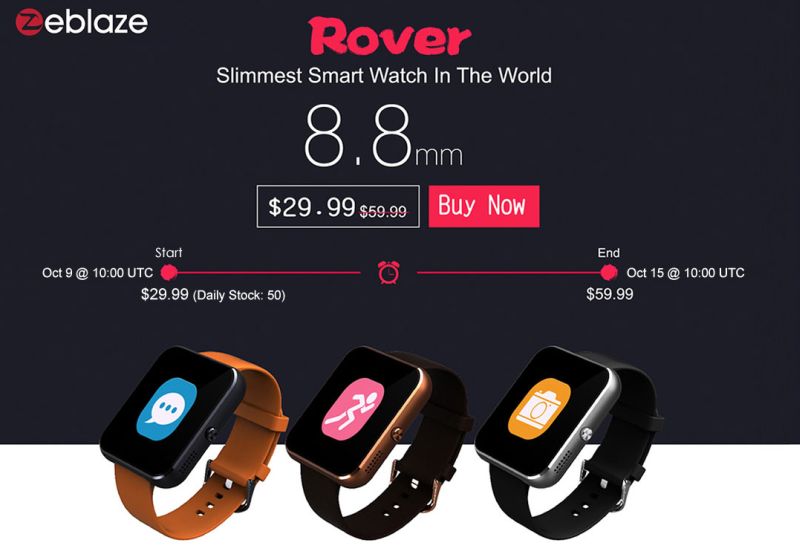 Gearbest comes with yet another great promotion for its customers. Two Zeblaze Watch models are for sale every day, starting 10:00 UTC, until October 15. The first 50 pieces of the Rover model can be purchased for only $29.99, the next items will be sold for$39.99. Regarding the other Zeblaze Watch model, the Crystal, the first 50 items go for only $54.99, then the price turns to $64.99. Given the characteristics of the Zeblaze Watches even the original price is extremely low. The flash sale price is even better, so don’t hesitate to order it starting 10:00 UTC.

The Zeblaze Rover is said to be the slimmest smartwatch in the world. Given its 8.8 mm width, this might just be true. The watch is made of high quality materials, which ensure a premium feel and durability. The Rover is also extremely light, so it will be comfortable to wear at any times. Comfort is also ensured by the leather strap  the Rover comes with. The leather and metal combination not only makes the Zeblaze Rover incredibly comfortable and durable, it also turns the smartwatch into a fashionable accessory users can proudly wear.

The device is also water resistant, so users don’t have to worry about a thing when wearing it. The 1.54- inch display is protected by toughened glass, so it won’t get scratched during your daily activities. Due to its 240 x 240 pixels resolution the image delivered by the Rover will be clear and bright. Being a smartwatch, it includes a number of health features. It features a pedometer and a sleep monitor, alongside the sedentary reminder. The watch is also equipped with a barometer and an altimeter. Check out the Zeblaze Rover promotion.

To prove that it is truly a smart watch, the Zeblaze Rover also has an anti lost alarm which will go on every time a certain distance sets in between the smartwatch and the smartphone it is connected to. This way users will never lose their phones again. The Rover is also able to notify its owner every time a text message or call is coming in. Users will be able to check their phone activity from the Zeblaze Rover’s interface. This device also supports Twitter, G-mail and WhatsApp push messages, so you can always stay in touch with your friends.

The Bluetooth 4.0 connection will ensure a fluent communication with the smartphone the Zeblaze Rover is connected to. The 250 mAh battery  is capable of ensuring up to 72 hours battery life between charges, so you don’t have to worry if you can’t charge it every day.

The Zeblaze Crystal is an improved version of the Rover. It comes with a more powerful processor, with built in memory and storage.  The health functions of the  Crystal are also better than the ones offered by the Zeblaze Rover. The Crystal also has a heart rate monitor alongside the other sensors the Rover had to offer.

Design- wise the Zeblaze Crystal is similar in measurements to the Rover, but its design is improved by the 3D single curved tempered glass screen which makes it even more fashionable. Theresolution of the screen is the same, so it will deliver the same crisp clear image the Rover does. Another feature which differentiates the Crystal from the Rover is that the Zeblaze Crystal comes with a 280 mAH battery, which is higher capacity than the Zeblaze Rover’s 250 mAh battery.

Both models are compatible with both iOS and Android smartphones, so you can purchase them no matter what type of a smartphone you want to connect them to. They are truly high quality smartwatches, so don’t lose the chance to purchase them from Gearbest. Be one of the first 50 people to order them starting 10:00 UTC and pay only $29.99 for the Zeblaze Rover, or $54.99 for the Zeblaze Crystal. Hurry, don’t waste any time!

I have always been eager to try out any gadget I could get my hands on. I became a tech journalist so that I could always be around technology and see the newest devices. I use gadgets every day to make my work and life easier. I have enough experience to know If a device is actually improving my activity, offers something useful or new. I will post my honest opinions and judge a device as objectively as I can.
@https://twitter.com/Colin27Anderson
Previous Apple blocks News app in China
Next Elephone M2, M1, Q and Trunk on Flash Sale each Wednesday