Great offer on Doogee F5 over at Everbuying

Everbuying continues to impress their customers with incredibly low priced smartphones. This time around, thesmartphone on sale is the Doogee F5. The 5.5- inch Doogee F5 4G phablet is now available for only $139.99. The price also includes free shipping. Although Dogee may not be as widely known as Samsung, Motorola, Apple and LG, it still deliver smartphones that rise above the expectations. And most definitely rise above their price tag. The Doogee F5 for example is comparable to Motorla’s X Play, but it is considerably more affordable. In other to convince you about this, we are going to present both devices to you.

The Doogee F5, as we already stated, is a 5.5- inch phablet. It features a full HD IPS OGS screen and has an impressive 82% screen- to- body ratio, which is pretty uncommon. It sports GFF full lamination, so the display is thinner and brighter than that of other similar devices. The body of the Doogee F5 is made of light metal, both for resistance and a premium feel and look. The Doogee F5 is powered by a 64 bit, MTK6753 octa- core chipset, combined with Mali-T720 GPU. The Doogee F5 includes 3 GB of RAM and 16 GB internal storage. The storage can also be expanded due to the TF card slot that supports up to 64 GB.

The Doogee F5 runs on Android 5.1 Lollipop and supports Wi- Fi, GPS, 3G and 4G wireless connectivity, alongside Bluetooth 4.0. The dual SIM, dual standby Doogee F5 also impresses with its dual cameras. The back camera has a 13 MP Samsung sensor. This promises to deliver incredibly crisp images. Thanks to the ISOCELL sensor also sported by the Doogee F5, the photo exposure is more accurate and the color range gets wider. Alongside the dual LED flash, these features will work together for delivering sensational quality images. 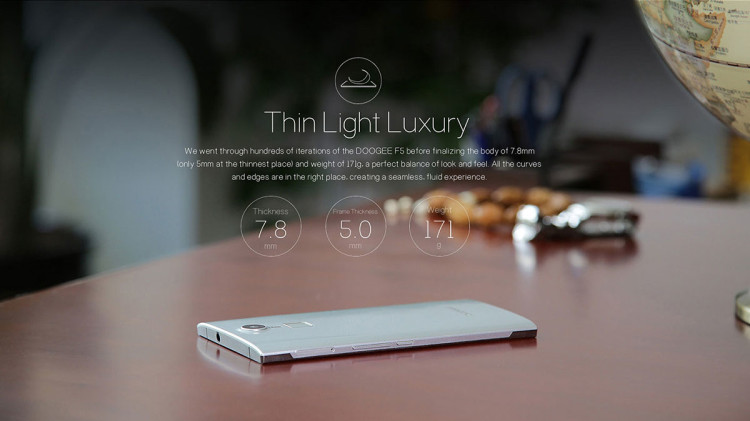 Other features of the Doogee F5 include a microSD card slot, micro USB port and 3.5 mm audio jack. The Doogee F5 also sports a number of sensors. It has a 360° fingerprint sensor, proximity sensor, gravity sensor alongside the ambient light sensor. Extra features of the Doogee F5 include 0.5 s screen wake up, multifonctional recognition, 5V/ 2A fast charge, dual silicone microphone and Xender sharing. The Doogee F5 also offers HotKnot File Transfer technology, so users will be able to transfer documents in a blink of the eye. Smart motion and touch- free smart gesture are also great features that the Doogee F5 has to offer.

Among the features of the Moto X Play we mention the water resistant coating, the fast charging feature. But the key feature of this device is its battery. The Moto X Play is equipped with a Non-removable 3630 mAh battery which should ensure a more than decent battery life. Compared to the 2660 mAh battery of the Doogee F5, the Moto X Play battery really strikes as being a lot higher capacity.

Although the Motorola X Play clearly has a better camera and a higher capacity battery, we can see that the majority of the specs featured by the two devices are similar, if not even leaning towards the Doogee F5. The Doogee F5 is not only slimmer, and has a more premium look due to its mainly metal body, it also has a higher screen- to- body ratio. These all make the Doogee F5’s design better. When it comes to memory, the Doogee F5 is also better with its 3 GB of RAM. It may not have such a powerful chipset as the Moto X Play does, but the Doogee F5 clearly makes up to that with its price. It is definitely more affordable, with its $139.99 price tag than the $599 Motorola. It’s up to you to decide if the extra features of the Motorola are really worth to pay more than three times the price of the Doogee F5 for them.

I have always been eager to try out any gadget I could get my hands on. I became a tech journalist so that I could always be around technology and see the newest devices. I use gadgets every day to make my work and life easier. I have enough experience to know If a device is actually improving my activity, offers something useful or new. I will post my honest opinions and judge a device as objectively as I can.
@https://twitter.com/Colin27Anderson
Previous Droid Smartphones To Be Unveiled October 27
Next New Siri and Google now hack discovered