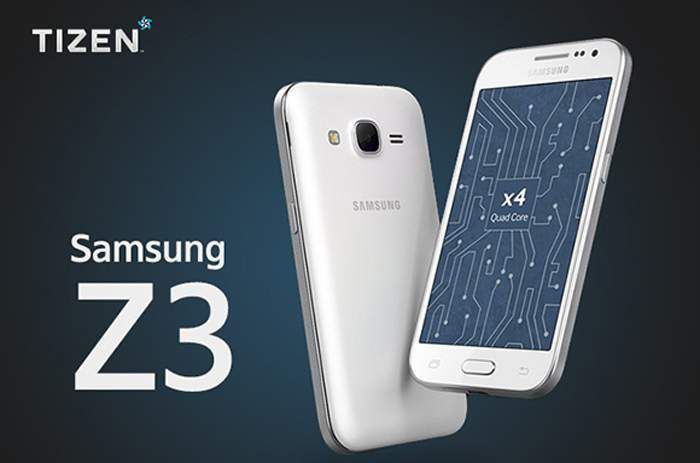 Early this year, Samsung released the Z1, which was the first smartphone who runs os Tizen OS. If you don’t already know, Tizen OS is an operating system developed by Samsung in association with other manufacturers. The phone was a big success because it was very cheap and has the quality of the Korean giant. Today, Samsung has launched the Z3, company’s second Tizen powered smartphone. Like it’s predecessor, Samsung Z3 will be released in India.

As Z1, the Z3 is a low cost smartphone but it’s hardware received a considerable upgrade and also an improved design. From the front, the phone is very similar with it’s predecessor, but the back now features a curve on both edges similar to the one that is prezent on the Galaxy Note 5.

The Z3 has a 5-inch HD Super AMOLED display with 294 pixels per inch, a 1.3GHz Spreadtrum quad-core processor paired with a Mali-400 MP2 GPU and 1 GB of RAM. In the back it has an 8-megapixel camera with a resolution of 3264×2448 pixels that is capable of 1080p video recording at 30 fps, and a 5-megapixel camera in the front. The front camera comes with „Beauty Face Mode” that automatically retouches images for flawless skin and „Wide Selfie” to capture up to 120 degrees of the users surroundings for the perfect group selfie shot. It also has 8 GB of internal storage expandable by a microSD slot up to 128 GB. Connectivity options include 3G, Bluetooth 4.0, Micro-USB, GPS with A-GPS, and Wi-Fi 802.11 b/g/n. The phone comes with a very nice 2,600 mAh battery and features Samsung’s Ultra Power Saving Mode, which disables all but the most basic functions to increase battery life. This device also features ‘Ultra Data Saving Mode,’ a function that supposedly allow users save on data costs by compressing all incoming and outgoing internet traffic.

I am passionate about gadgets and everything tech related.
Previous New smart key device Monkey now on Kickstarter
Next New information about Facebook’s Notify app has leaked