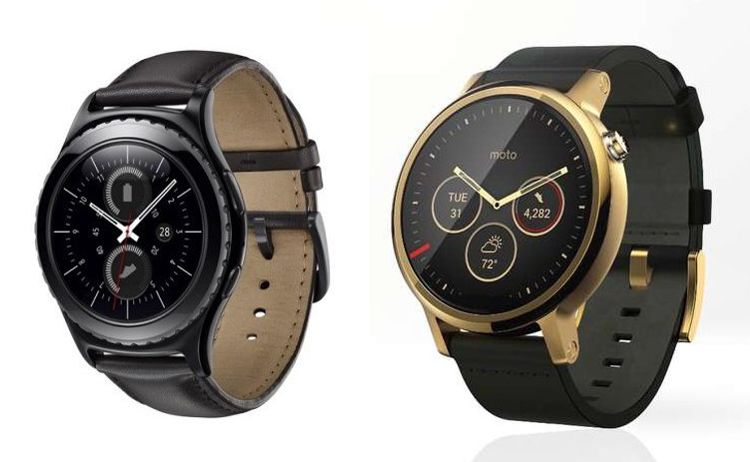 Samsung’s Gear S2 and Moto’s 360 2nd gen are probably the best surprises of the last quarter of 2015. The smartwatch market is one of the most fast growing one in the IT world. The top manufacturers are upgrading previous models or launching new ones every year, similar to what they’re doing with smartphones. On the plus side this means that there is always something new to be expected every year, but it also means that the differences and upgrades are small and a device’s evolution in happening in small steps and lot big leaps.

The Gear S2 and Moto 360 are their respective brand’s wearable flagships. They are likely to compete with each other head to head in all aspects. Both will be depicted as the industry’s best gadget with the most impressive features and capabilities. Marketing will play a vital role in influencing the decision on which smartwatch, Gear S2 or Moto 360 to spend your money on. At a first glance they seem very similar to each other and might give the impression that their hardware specs might also be alike. Let’s take a closer look at these two heavyweights and see what is similar, what is different and at the end try to declare a winner. 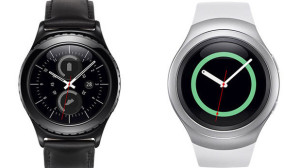 The Gear S2 has a round clock face, similar to Moto’s smartwatch. The frame itself is not full round, but the top and bottom are curved and this makes the watch sit comfortably on the wrist. Samsung made this watch is 3 versions. The first is the Gear S2 Classic, that features a black body with leather straps. It’s dimensions are 40 by 44-mm, 11.4 mm thick and weighs 42 grams. The straps are fitted to the watch with a standard system, this means that you can easily change the straps with one from a different manufacturer.

The second version, called simply Gear S2 has a more sporty, modern look and different colored straps are available for it. The fitting system is not standard, so users have limited options when choosing a strap. This model is a bit bigger than the Classic it is 42 by 50 mm, same thickness 11.4mm and weighs 47 grams. The last version looks just like the Gear S2, has the same dimensions, but it has 3G support. This was you could use the smartwatch to make calls or send content without being  connected to another device.

A very useful and cool feature found on the exterior of the Gear S2 is the rotating bezel. This bezel is used to navigate in the menus and different apps. Samsung’s OS integrates this input method very efficiently, items are usually displayed in a circle around the edge of the display and spinning the bezel let’s you choose what to access and in apps like Maps the rotating motion controls the  zoom. All 3 versions of the Gear S2 have a 1.2 inch AMOLED display with a 360×360 resolution and a pixel density of 302 ppi. The image delivered by the Gear S2 is very sharp, the icons and text look clear even though the screen is smaller compared with other smartwatches. The exterior seems solid, the metal frame give’s the Gear S2 a feel of high quality and toughness. The versions are IP 68 dust and water resistant.

On the inside, the watch is powered by a dual-core 1.5 GHz CPU and features a internal memory of 512 MB. There are 4 GB available for storage and installing apps. The battery is bit small, in my opinion, only 300 mAh for the 3G enabled version and 250 mAh for the other 2 versions. Samsung claims that the Gear S2 has a 2-3 day autonomy. The Samsung Gear S2 has an orientation for sports, besides all the sensors and features used while doing sports Samsung teamed up with Nike for the Nike+Running feature.  The Gear S2 senses when you are working out and automatically starts tracking your activity.

As far as connectivity goes the Gear S2 has all the capabilities, Wi-Fi, Bluetooth, NFC and of course 3G an GPS for the version with Micro SIM support. A positive aspect is the fact that you can sync this device with any Android running device. There are a few restrictions, like the handset needs run on Android 4.4 or better and it must have a least 1.5 GB of RAM. The watch runs on Samsung’s own OS called Tizen. Here are the Gear’s S2 main characteristics: 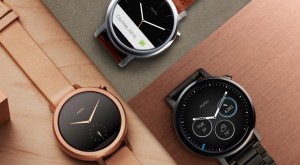 From the start we see that Moto made this device in 2 size variants, just like the previous model. A 42mm watch for men and women and a 46mm one aimed at men. Moto brings slight improvements to new 360’s design that make this device look more elegant and high-class. The crown is now sitting at 2 o’clock and the bezel comes in different colors and textures. The straps fit on a pair of stylish lugs attached to the watch, not built in like on other devices, the lugs come in 3 different sizes: 16, 20 and 22 mm. These dimensions are linked with watch’s size, the 16 and 20 mm wide lugs are found on the smaller 42 mm device. It’s rated IP 67, dust and water resistant, inferior to the Gear S2’s IP 68.

The new Moto 360 comes in different colors: gold, rose gold, silver and black. Straps are also available in a wide range of variants, stone grey, blushed brown and double wrapped brown Horween leather. You can also attach a black, silver, gold or rose gold metal strap. Moto 360 uses a standard system to attach the straps so you can use a strap from a different manufacturer.

Moto 360 2nd gen comes in two display sizes, a 1.37 inch LCD with a resolution of 360×325  and a 1.56 inch LCD with a 360×330 pixel resolution. The pixel density is 233 ppi for the smaller screen and 263 ppi for the larger screen, both variants have an image quality inferior to Samsung’s Gear S2 who’s sharper image stands out in spite of the smaller screen. But this is not the display’s biggest drawback, the presence of a black flat tyre at the bottom of the screen is. It houses the ambient light sensor, but even with this purpose it can still be a deal breaker. I don’t find it very annoying, but when there is a light color in the background on the display that tyre makes the watch look less elegant and classy. In this aspect the Moto 360 falls a bit behind compared with the Gear S2 or a Huawei smartwatch.

The device is powered by a guad-core 1.2 GHz Snapdragon 400 processor and has 512 MB of RAM, there’s 4GB of internal storage space just like what we see in the Gear S2. The batteries differ for the 2 sizes of the watch, the smaller one is equipped with a 300 mAh battery while the biggher 46 mm watch has 400 mAh one. Excluding SIM support, the new Moto 360 has all connectivity capabilities and the Sport version includes GPS.

It runs on the updated version on Android Wear and with efforts from Moto the OS has been improved in terms of intuitiveness, responsiveness and has a more pleasant design. One feature found only on the new Moto 360 is Live Dial, this lets users to set dials on the home screen. This device is compatible with any Android device running 4.3 or higher and iOS 8.2 or higher.

Here are the key features of the Moto 360 2nd generation

It’s a pretty close race between these two devices. The Gear S2 has the advantage of the crisp image, the full round display and the rotating bezel to make the navigation easier then ever on such a small screen devices. On the other hand, what the Moto 360 lacks on the display part makes up design and hardware wise. There is little doubt that the Moto 360 is more elegant and stylish device then any other smartwatch, Moto also gives us a lot of size, color and strap choices.  The hardware found on the Gear S2 and Moto 360 are similar, but the Moto has the advantage of a bigger battery which gives it a longer autonomy.

Overall, for me, the Moto’s only disadvantage is that black tyre on the bottom of the screen. But taking into consideration the look, hardware and the fact that it runs on Android Wear, I have to say that I prefer the Moto 360 2nd gen to the Gear S2.

I have always been eager to try out any gadget I could get my hands on. I became a tech journalist so that I could always be around technology and see the newest devices. I use gadgets every day to make my work and life easier. I have enough experience to know If a device is actually improving my activity, offers something useful or new. I will post my honest opinions and judge a device as objectively as I can.
@https://twitter.com/Colin27Anderson
Previous Galaxy S7 vs. iPhone 6S Plus- Will Samsung or Apple win the battle?
Next iMac vs. Aspire Z3- 700: Which Is The Ultimate AiO?