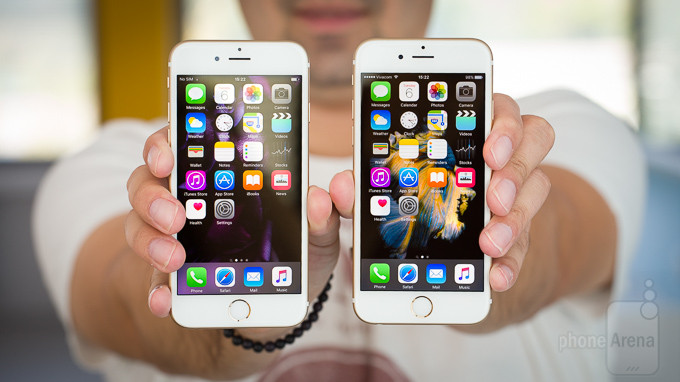 The hope with new smartphone releases is always that they will improve everything that was wron with the last model. While some companies manage to pull off such things, most leave out a few mistakes and tweaks. The iPhone 6S and iPhone 6 are both very recent Apple releases which have their faults and their positives, as well as improvements over their predecessors. In this short comparison, we will be finding out whether the iPhone 6S battery life is better than the iPhone 6 battery life.

Amid reports about CPU problems in the iPhone 6S and battery drain in the iPhone 6, it is hard to determine if Apple has a smartphone that is consistent with its features. Battery life has been an issue at various times in the company’s history, but most obviously with iPhones. While the iPhone 6 and iPhone 6S battery life are greatly improved compared to older models from the company, they still leave room for improvement. With the rumors about the iPhone 7 sporting a larger battery and wireless charging, I suspect Apple fans don’t have a long time to wait to get stellar autonomy.

The iPhone 6S battery life for most people is pretty decent, at around two days of regular usage. The iPhone 6 and iPhone 6 Plus manage similar autonomy scores in real life battery life tests. If resource-hungry apps like 4K recording aren’t used on the iPhone 6S, users should expect a pretty consistent battery life from the device.

Recently, with updates to iOS 9 coming out often, people have been complaining of battery drain on the iPhone 6 and iPhone 6S. But these early complaints can be somewhat disregarded seeing as it is normal for phones to use up more power after a software update because they continue optimizing apps and features and adding new tweaks. If the battery life of a device is not stabilized after two weeks once the update was installed, visiting Apple Care might be something to consider.

The good thing is that it appears as if the majority of iPhone 6S users are having rather positive experiences with autonomy. The iPhone 6S battery life is reported to be better than the iPhone6 battery life in the iOS community. There are of course exceptions, those who can’t get a day out of their iPhone 6S or iPhone 6 battery, but these usually stem from hardware issues which should be solved through Apple Care and represent a small portion of users out there.

Although the iPhone 6S battery is slightly smaller than the iPhone 6 battery, fueling concern about autonomy, real life battery tests suggest that the battery consumption of the iOS 9 has been optimized to the point where the iPhone 6S actually has a longer battery life than the iPhone 6. With users getting upwards of 7 hours of screen-on-time, with an average of 8 hours based on various benchmarks and real life tests, the iPhone 6S is truly a device that can compete in the market.

Android smartphones like the Xperia Z3 Compact, Galaxy Note 4 and LG G3 have already demonstrated that prolonged autonomy is possible even on devices with large, QuadHD displays and Apple is now following suit. The iPhone 6S battery life is impressive and with subsequent software updates, it might even get better. Although the iPhone 6S tops the iPhone 6 battery life, it still stays behind champion flagships like the Galaxy S6 Edge +, Galaxy Note 5 and Galaxy S6 Active.

The iPhone 6 battery life measured in on-screen-time is at about 6 hours on a daily basis, which is quite the difference. Clearly, Apple listened to feedback and learned that users would rather have a slightly thicker, heavier device and better battery life than the other way around. With constant improvements being made in battery technology, Apple has nowhere to go but up. That being said, we expect the iPhone 7 battery life to be the truly impressive one.

Tech Editor with lots of experience with PC hardware components, iOS and Windows-based mobile devices, and love keeping myself up-to-date with any developments in the industry, which I make my job in sharing with you, our readers.
Previous Body Heat as Power Source – the Lumen Flashlight
Next Marshmallow Update Available For Moto G1 via CM 13