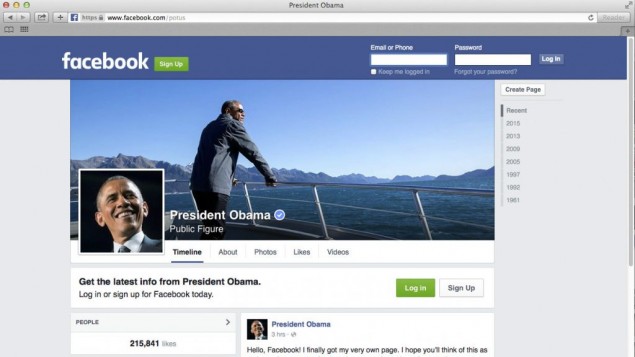 As of Monday Barack Obama, the 44th President of the United States of America has his very own Facebook page, or at least that’s what the White House stated in a press release. There were already a number of social media pages available in the name of the most powerful man in the world, but it seems that the most recently launched one is the less official one. According to the President himself, the Facebook page launched yesterday will be a place where people will be able to address him and where real conversations can be had about the most important issues regarding the USA.

President Barack Obama started his Facebook activity with a post that was written in a very cordial and familiar voice, making him seem to be genuinely interested in creating a friendly atmosphere where everyone can share their thoughts and feelings. Then he goes on with sharing his own feelings regarding the need to preserve what he calls “this beautiful planet of ours for our kids and grandkids”. Basically, the very first post on President Barack Obama’s very own Facebook page is a way to raise awareness about environmental issues. This could be a way for the White House to further raise people’s interest in this matter, or it very well could be exactly the thing that preoccupies the President most at this point, since he is going to a conference to Paris where there will be discussions held with word leaders about this subject.  Either way, awareness about climate change was raised as of yesterday, so the goal was reached.

President Obama’s new Facebook page also hosts a video that shows the President of the United States walking in his “backyard”, otherwise known as the South Lawn of the White House. According to Barack Obama, there is a fox living on the premises and there is also a hawk nearby alongside squirrels that complete the national park. Of course the mentioning of the wildlife present in the national park, which is called the South Lawn of the White House,  leads to a talk about the environmental issues we are facing and the Paris conference that President Obama will attend in December. The President of the US seems to genuinely be interested in preserving this planet and its beauties, which we salute. Using Facebook as a platform for his campaign was a very clever move, since Barack Obama himself states on his page that three in four adults online use Facebook, making it easier for his voice to be heard.

It is possible for this Facebook page to also be handled by the 20- person social- media team that manages the president’s social media accounts, as it was reported by some, but at the end of the day it doesn’t really matter if President Obama himself writes his posts or they are written by White House staff. What really matters is that the president of the US is bold enough to launch a Facebook page where his thoughts on different matters will be able to meet the thoughts of regular people on the same matter. Even if it proves to be a Facebook page managed by his staff, at least it creates the illusion that the president wants to get closer to the citizens of the country he has been running for seven years now, and these days even an illusion is more welcome than nothing. At the same time the Facebook page shows that even if he is the most powerful person in the world, Barack Obama is still a person who cares for the same things that we should care about. If you could address him on any matter, what would it be?

I have always been eager to try out any gadget I could get my hands on. I became a tech journalist so that I could always be around technology and see the newest devices. I use gadgets every day to make my work and life easier. I have enough experience to know If a device is actually improving my activity, offers something useful or new. I will post my honest opinions and judge a device as objectively as I can.
@https://twitter.com/Colin27Anderson
Previous OnePlus X vs. Moto X Play- Which X grants a better Xperience?
Next Acer Launched Liquid Z530 and Z630 in India