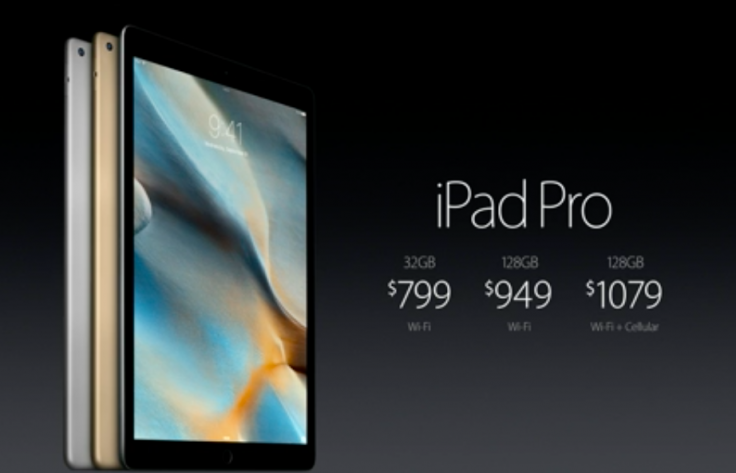 As of today, the iPad Pro is available for online purchase and it seems it will hit the shelves of retail stores also later this week. The long awaited giant tablet of Apple’s by itself will cost $799, but the majority of customers will probably opt to purchase the Apple Pencil and the Smart Keyboard also, which means that they will have to pay a $1067 total. It might be a lot, but it also might be worth it if we consider the high- end specs of the latest tablet delivered by the Cupertino- based tech giant. The larger storage- version tablet will be sold for $949 while the cellular model will go for $1079.

This huge tablet has a 12.9- inch, LED backlit, multi- touch display with 2732 x 2048 pixels resolution and 264 ppi pixel density. It is a Retina display, which means that the images delivered by the iPad Pro will be quite amazing. It is powered by an impressive A9X third-generation chip with 64-bit architecture alongside an M9 motion coprocessor, which will make the device run smoothly and zippy. It should, given its price tag, and even more, given its manufacturer. Apple doesn’t really disappoint with its flagship devices, and it certainly didn’t with its flagship tablet. Other specs and features of the iPad Pro include a 1.2MP FaceTime camera, an 8 MP back camera, Touch ID, Smart Connector and a battery that is said to last for up to 10 hours when sufring the web, watching videos or listening to music.

Besides its huge body and screen, the latest Apple tablet really impresses with the way it works. It runs on iOS 9, which is the manufacturer’s latest operating system. This means that the tablet supports Split- Screen multitasking making it a useful tool, and will also be of great help for grapfics pros due to the support of the Apple Pencil and the apps optimized for this particular device. The Pencil in itself is a great addition to the latest Apple tablet, making it easir for users to take notes, draw, work on scetches and what not else. It is not as sensitive as the Surface Pen, but it is quite attractive both thanks to its design and its features, specially its precision. The Smart Keyboard on the other hand is not exactly impressive, but it does come in handy when typing is required.

Although the Pro is not powerful enough to be able to replace a laptop or a desktop, it is certainly an extremey useful gadget that allows users to complete urgent work even when they are on the move. It is big, but it isn’t heavy, so it is highly- portable, making it one of the best devices of this kind we’ve seen so far. Apple managed to deliver a great tablet, and although it is a little expensive, we would not be surprised to see it sell extremely well.

I have always been eager to try out any gadget I could get my hands on. I became a tech journalist so that I could always be around technology and see the newest devices. I use gadgets every day to make my work and life easier. I have enough experience to know If a device is actually improving my activity, offers something useful or new. I will post my honest opinions and judge a device as objectively as I can.
@https://twitter.com/Colin27Anderson
Previous Tinydeal offers you the chance to save 36% on the Xiaomi Mi Box
Next Steam controller – the bridge between a controller and a keyboard+mouse