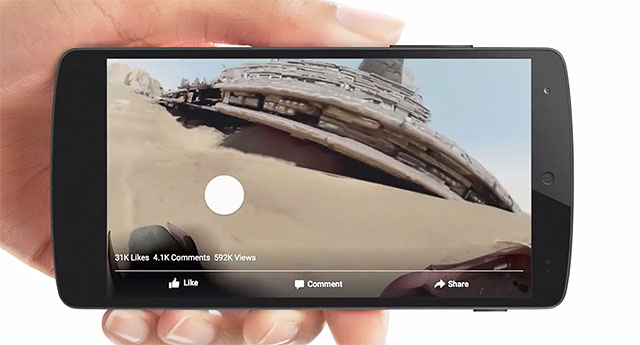 Facebook’s 360 videos are now on iOS

In September, Facebook launched a new feature, the ability to watch and share 360 videos, that were at the time available only on the web or for Android users. As of November 12 iOS users can also watch this kind of content on their mobile devices, making the 360 videos even more popular. This is great news for all the publishers out there that create VR- like videos that are now available to all of the smartphone and other mobile device users. At the same time, the 360 videos from Facebook’s News Feed became available on Samsung Gear VRs also.

Facebook doesn’t seem to stop here with pushing their 360 content. The social network also announced that they are launching a brand new 360 video microsite that is meant to provide relevant resources and information to those who wish to create this kind of content. With this tool, 360 video creators will be able to get useful information about the best practices based on the experience of two of the best pros in this industry, Chris Milk, and Aaron Koplin, both working at Vrse, one of the most well-known reality studios.

Mark Zuckerberg’s company seems to be really invested in promoting the virtual reality videos, given the fact that Facebook now also introduced the possibility for users to edit the initial camera position and vertical field of view on their Pages before they upload their 360 content.Facebook also made it known that hey are collaborating with several camera manufacturers to develop in- app options to publish the recorded videos to Facebook without being necessary to previously download them to a computer. This will definitely make sharing videos easier, skipping a step that could take several minutes. Sharing content in this simplified way will most likely be welcomed by the majority of users.

Last but not least, in the same blog post, the world’s most used social network also stated that they are planning on delivering 360 video advertisements as well. So far they named AT& T, Corona, Nescafe, Ritz, Samsung and Walt Disney world as companies that are running 360 video ads. They are also going to test this kind of format with other advertisers as well. It seems that we will get more and more 360 content on our News Feed. Although it may not be everyone’s cup of tea, this new feature can be quite entertaining for others. Do you like to watch this kind of videos?

I have always been eager to try out any gadget I could get my hands on. I became a tech journalist so that I could always be around technology and see the newest devices. I use gadgets every day to make my work and life easier. I have enough experience to know If a device is actually improving my activity, offers something useful or new. I will post my honest opinions and judge a device as objectively as I can.
@https://twitter.com/Colin27Anderson
Previous Samsung Galaxy S7 – More rumors every day
Next Fossil Group to acquire Misfit for $260M