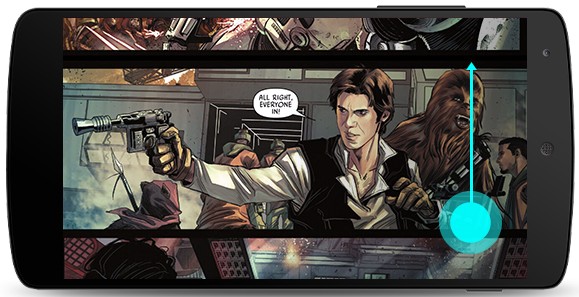 Comic books have almost completely left the paper print world, now every major comic book is available on electronic media, thus being able to reach every fan that has access to the internet. Google have always kept pace with it’s users desires, whether users wanted apps for increasing productivity or just for entertainment. On the 13-th of November, to please users who enjoy reading comics on their mobile devices the Google Play Store received an update that optimizes comic-book viewing and reading.

The Senior Project Manager of Google Play Books said: “Reading a comic book is all about following the story and enjoying the art, dialogue, and pace the way you want. But navigating a comic can be tricky on a small phone or tablet screen. So, we’re introducing a new vertical scrolling experience for comics in landscape mode. Flip your device on its side and you can easily scroll through the story with quick vertical swipes.”

The update improves two major aspects regarding comic-book reading, searching, and organizing. The first aspect is reading the comic-book, the new layout displays the comics in landscape mode and the reader only scrolls vertically with easy, short swipes on the screen. This landscape vertical scrolling feature, added on Google’s Play Books e-reading app, significantly improves the reading experience.

The second part of the update comes with improvements to the Play Store’s comics section. It’s basically a redesign that includes organizing the most famous comic books by series, issues and other criteria. The new interface will offer recommendations  based on similarity with other comics that the reader might enjoy.

The new update will roll out soon and it will pop up on most android devices during the next few days. A similar update will be coming to iOS users soon enough. Check out Google’s Play Books comics selection, you can find known titles like The Walking Dead, Star Wars, Superman, Deadpool and many others, plus there is also a large number of free comic.

I have always been eager to try out any gadget I could get my hands on. I became a tech journalist so that I could always be around technology and see the newest devices. I use gadgets every day to make my work and life easier. I have enough experience to know If a device is actually improving my activity, offers something useful or new. I will post my honest opinions and judge a device as objectively as I can.
@https://twitter.com/Colin27Anderson
Previous Tesla Model X is the new status symbol – Batmobiles are paseé
Next Google will alert Gmail users about unencrypted emails