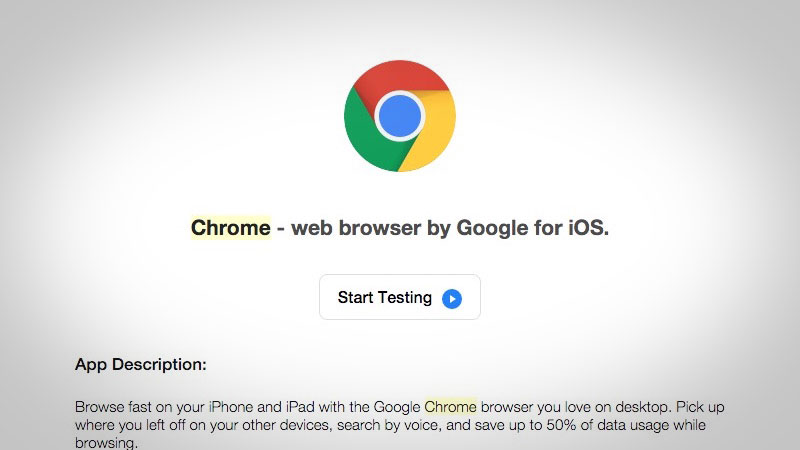 Yesterday Google announced in a blog post that iOS users will be able to test the beta version of Chrome, which is available for Windows, Mac, Linux, Chrome OS, Android and now iOS. None of the other two Chrome channels, the dev or the canary, were available for iPhone and iPad users, so this is the first time this niche of users will be able to test the Chrome beta for iOS. All they have to do in order to try out this browser’s beta is to enter their email address and confirm that they “understand that Google will share your information with Apple in order to participate in the TestFlight program”. After this, a confirmation of the email address will be needed and shortly after confirming it, users will receive an invitation to join TestFlight, which is Apple’s developer tool.

Users that wish to have Chrome beta for iOS on their devices will have to install TestFlight on their smartphone or tablet, tap the “redeem” button and then enter the code they received alongside the invitation. If they already had Chrome installed on their devices they then have to choose to replace the existing app version with the test version. This new version supports more Bluetooth keyboard shortcuts and it supports 3D Tough on the iPhone 6S and 6S Plus, making it one of the first apps that actually puts this feature of the iPhones to good use. The 3D Touch feature will allow users to open a new tab, a new incognito tab or start a voice search by force touching the Chrome icon on their device.

The fact that Apple just doubled the number of testers and the length of the testing period allowed on TestFlight makes it possible for the beta channel to reach a greater number of users, which is great. The app can become more popular this way and the feedback could allow Google to develop an even better browser for its users. If you get to test Chrome beta for iOS, please let us know what you think about this app.

I have always been eager to try out any gadget I could get my hands on. I became a tech journalist so that I could always be around technology and see the newest devices. I use gadgets every day to make my work and life easier. I have enough experience to know If a device is actually improving my activity, offers something useful or new. I will post my honest opinions and judge a device as objectively as I can.
@https://twitter.com/Colin27Anderson
Previous Google will alert Gmail users about unencrypted emails
Next Next- Gen Apple Watch to be Released in 2016