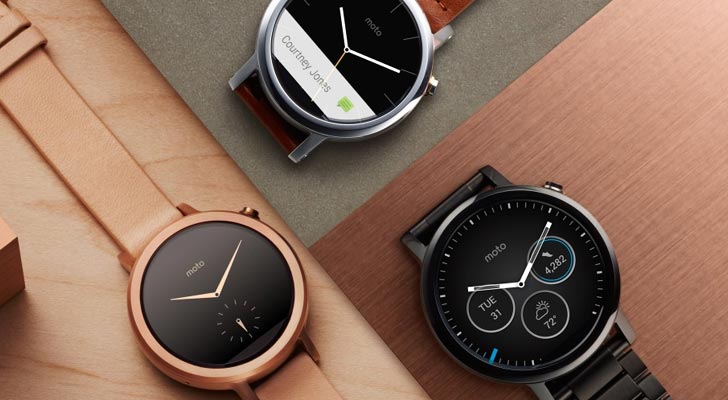 Smartwatches were only a dream a few years back, now they are a must have in our lives. Although we can live without them, we don’t want to, because they are quite awesome. We’ve seen an impressive lineup of smartwatches this year, most of them running on Android Wear. The king of the hill seems to be the Moto 360 2nd generation, which was released in September, only a couple of months ago. It is the second version of Motorola’s smartwatch and it is even better than the previous one which was already quite impressive.

Although at first glance the design of the Moto 360 didn’t change a lot compared with the new model, it was improved due to the addition of the wings, which allow users to change the band more easily, and the crown was also replaced for simpler use. The second generation Moto smartwatch kept the round design, which is more appealing to the majority of people than the rectangular one, possibly because it resembles traditional watches more. It is also preferred by women, being the first smartwatch that actually looks feminine enough for them to wear it without looking ridiculous. he fact that the smartwatch can be customized with Moto Maker in a lot of different variants is also a great thing about this particular smartwatch. Everyone can get exactly the look they hoped for their watch. But the Moto 360 2nd generation is not just another pretty face in the crowd, it is also quite useful and fun to wear.

The display of the smartwatch is an LCD one, with 360 x 325 pixel resolution for the 42mm model and 360 x 330 for the 46mm version of the wearable. It’s not as impressive on paper as the display of some of the other smartwatches that were recently released, but it is still clear and bright. One thing about the display of the smartwatch that bothers a lot of people is that it still has a “flat tire”, where the ambient light sensor is integrated. This is not found in other smartwatches from the same range, and it could be a turndown for many customers. Maybe Motorola will do something about it on their next model.

The second generation Motorola smartwatch didn’t only bring changes in the design section, it also comes with a number of new features. The wearable not only offers standard Android Wear fitness apps, it comes with Motorola’s own Moto Body. This feature allows users to monitor their heart rate, the burned calories and it includes a pedometer. Furthermore, the Moto 360 2nd generation will keep track of user’s daily activity, reminding them to be more active and even popping motivational messages up from time to time. The Moto 360 2nd generation also offers a wide range of watch faces users can opt for, making the gadget more fun and appealing.

The second generation Motorola smartwatch is faster and more powerful than its predecessor, due to its Snapdragon 400 processor that is clocking at 1.2GHz. It also has an Adreno 305 with 450MHz GPU that helps to improve the user experience.The gadget includes 512 MB of RAM and 4 GB of internal storage, which isn’t the most we’ve seen, but it is more than enough for a smartwatch, to be honest. The internal storage ensures enough space for your music and the memory is enough to make the gadget zippy. The 42 mm model houses a 300 mAh battery that is said to ensure a day’s worth of battery life when the ambient screen is turned on and a longer, 1.5 days long life when the ambient screen is off. The larger model has a 400 mAh battery that should last for up to two full days. The wireless charging dock is similar to the one featured by the previous version of the Moto 360, but now users can choose the colour of the charging display in dock mode via the Moto Connect app.

All in all the Moto 360 2nd generation smartwatch is a good wearable, even if it’s not perfect. it’s good looking, powerful enough and you can buy it for $299.99, which is a lower price than the one of other smartwatches released this year. It is one of the best choices for women, in particular, the 42 mm version being the most feminine gadget on the market. of course, the larger male version also looks good, but men have a lot wider range to choose from at this point. The fact that it can be customized through Moto Maker only adds to the value of this smartwatch.

I have always been eager to try out any gadget I could get my hands on. I became a tech journalist so that I could always be around technology and see the newest devices. I use gadgets every day to make my work and life easier. I have enough experience to know If a device is actually improving my activity, offers something useful or new. I will post my honest opinions and judge a device as objectively as I can.
@https://twitter.com/Colin27Anderson
Previous Black November Tablet Sale – Don’t miss it!
Next Tesla style scooter Gogoro launching in Amsterdam